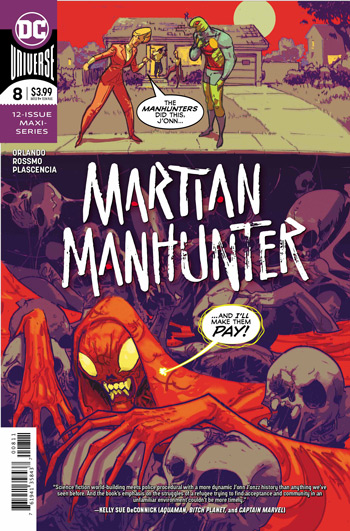 “You’re one of us now.”
Steve Orlando is brilliant, simply put.

Issue #8 of the seminal Martian Manhunter limited series he’s been making with master artist Riley Rossmo, is a superb bit of storytelling that shows you just how well Mr. Orlando understands how to draw upon the basic mythology of a character, expand upon it, and use it to tell an excellent story that is both entertaining and universal. The mark of any good storyteller. But Orlando makes it look simple.

What better way to show that off than by giving us a story this month that explores Manhunter J’onn J’onzz’s human side – quite literally, the life of the man who’s shoes the Martian has filled since assimilating into human society, the life of Detective John Jones.

This, finally, is the tale of Diane Meade and John Jones, when first the two detectives meet. When Meade first joins the police force in Colorado. And Jones selects her to be his partner.

Because this is Orlando, there’s a story in there, one that shows us (more) of Detective Meade’s uncompromising mettle, and the consequences of that. And the story of a man who for his own reasons, gives her a second chance to be exactly who she is and wants to be.

That we’ve seen the elements of this coming together for a few issues now, does nothing to diminish the enjoyment when that symmetry lands in the current-day reconciliation between Meade and J’onn.

J’onn’s won her respect in the field, the respect of a fellow warrior. And with that, comes a gift: her willingness to listen, and a bit of wisdom on the back-end. One that she once learned herself, from a good friend.

Because sometimes everybody needs second chance.

It’s simple, and elegant, and it’s damn effective. And after 7 issues of build-up, it’s a pleasure to watch everything come together into the defining moments of a friendship that, after all, is foundational to the Martian Manhunter’s canon.

Really though, this is just one layer of a multi-textured play on the themes of belonging and otherness. Orlando’s got them running throughout. So, while J’onn is busy getting better acquainted with his human side, we have in counterpoint, the final outcome of the monstrous, red Martian Charnn’s millenia-long quest to break the barrier between human and Martian DNA…

…with dramatic consequences for a certain young alien-abducted earth girl.

Next Issue: It’s not easy being green