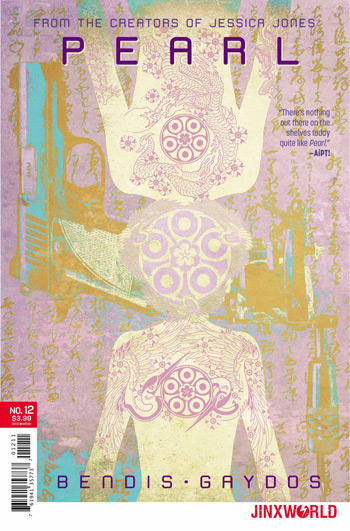 This is the last issue of the current series. This has been a book that has been great at times and not so good other times. I would start finding myself involved in the story, and then Bendis would put in a flashback and I’d be instantly taken out of it.

It happened a lot and my interest would wane when it occurred.

So how does this issue fare?

Well, it’s okay. The first page of the issue has Kimmi telling her boss that she has to go to San Francisco to meet up with Pearl. Pearl is back from Tokyo and Kimmi says that she is needed. Her boss isn’t happy.

But she goes anyway. It’s not a bad setup for the issue.

But then, Bendis throws up so much information at the reader that it’s hard to keep track of what actually occurred. At least it felt that way from my reading experience.

From there, we cut over to San Francisco. We see Pearl in the middle of a shakedown. In the middle of it, Pearl starts asking questions about her past and specifically her mother. The reader gets a lot of exposition  in the scene. And then when that’s over, a huge gunfight erupts. It was pretty obvious that is what we were headed for. At least it’s Michael Gaydos drawing this scene, however.

Gaydos draws the action scenes magnificently. He really captures the adrenaline and violence perfectly and tastefully.

By the end of it of the issue, we do get one more flashback. It was kind of unnecessary at this point but whatever. The ending is fairly lame too and it felt incomplete and forced. And then it just ends on a sort of obvious and stilted whimper. Ah, well.

I don’t think there will be a sequel to this. I think that they ran out of steam around issue number six and never recovered. And that’s okay. But they probably should have just ended there as the last six issues felt like a drag. And this final issue ends the whole thing in a flat way. At least it came out quick and was less painful that way.

The only thing that is bad is all the lost potential and promise to this series that it showed at the beginning.