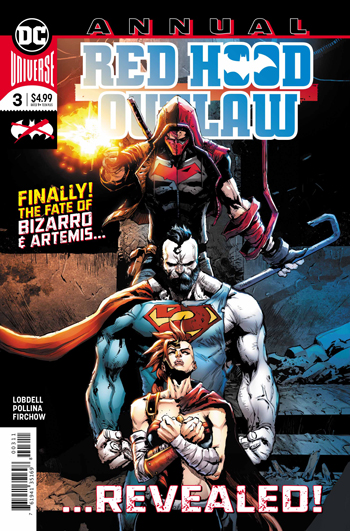 This is a great annual!

While the main book has been focusing on Jason Todd and his exploits, this shows you what happened to Artemis and Bizarro after issue number 25!

It’s been almost a year since we last saw them so this is a welcome bit of fresh air to read!

The book opens with a prologue.

Jason Todd visits to Caden who is on a swing set. He knows that Caden can link up to the dead and wants to learn that ability. Caden takes Jason’s hand and it raises a few questions as to what is going on here.

From there, we flash back to six months earlier.

Bizarro narrates what is going on with him and Artemis. They are on this alternate earth standing in front of a “Hall of Punishment.”

From there, they travel this bizarre world and the many things that it has to offer.

It really is a crazy place. The craziest thing in the entire issue is Superman lying dead, crushed underneath the Daily Planet Globe. Bizarro and Artemis try to figure out just what is going on and more importantly, how to get the heck out of there. The story becomes increasingly strange and that is a very good thing.

Time goes on. Artemis and Bizarro are there for six months. They become sort of crime fighters on this world.

Eventually, they fight against a really weird version of Lex Luthor. They eventually think that they may have found a doorway out of this crazy place. The ending is pretty sweet and I just loved where this story took us.

The only thing that I didn’t quite understand is why we needed the prologue here. It feels rather tacked on and awkward. That being said, besides that, this is a strong annual and a very enjoyable and exciting story here.