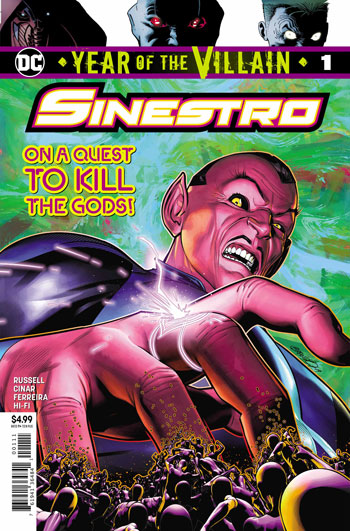 I’m a pretty firm believer that if you put Mark Russell on a book, that he instantly makes everything better.

His scripts are fun and well paced and definitely unique. When I heard that he was going to be writing a Sinestro story,

I was filled with glee. Luckily, this is another fine script by Russell that captures the character of Sinestro pretty perfectly.

In the beginning of the issue, Lex Luthor has a meeting with Sinestro.

In the meeting, Luthor talks about a species called Paragons who want to stop the universe from heading towards doom. Luthor sends Sinestro to stop them and to end the threat that they possess.

Things get off to a rousing start too as we are immediately shown a big fight.

Sinestro brings the fight to these Paragons. Over the course of the issue, Sinestro starts to learn about this race of creatures. He learns what they stand for. He also learns about what they want. It’s not what he expected at all.

Sinestro does some investigating. Through it all he’s trying to find a way to defeat this alien race. Things don’t go as planned. He actually start to get frustrated. How can he take these creatures down? The answers come pretty fast and furiously. And they were not at all what I expected.
By the end, Sinestro learns all about these aliens. And then he has a hard choice to make. Things are left pretty open ended but that’s part of the fun. I’m curious to see how this plays into the bigger story line that is being set up. We shall see.

The story is very action packed but it is also thoughtful. Russell is making quite a name for himself and this issue shows why he deserves it. I like the art even though it was a bit cartoony for my tastes. It’s a nice one shot overall, that is a pleasure to read. It also shows us another side to Sinestro’s character. It was pretty cool overall and a decent chapter into the bigger storyline that DC has planned.