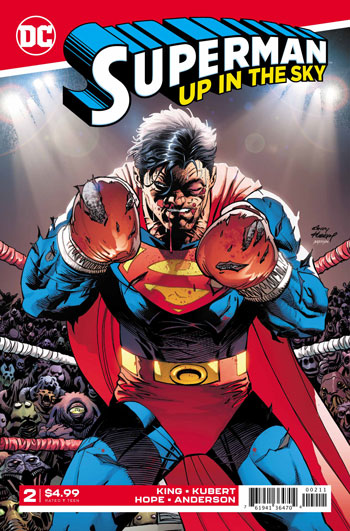 In the last issue, Superman began his intergalactic pursuit of a little girl was who kidnapped. His decision was made to the dismay of some who felt leaving Earth vulnerable for a rescue that is unlikely to pan out is too risky.

Superman is on the case and to get his first clue, he needs to win a boxing match. The brutality inside the ring is beautifully depicted.

However, speaking as someone who has booked his share of professional wrestling matches; the finish didn’t make sense. Superman was beaten to a bloody pulp, refused to lose, and his opponent yielded because he couldn’t believe anyone could take that amount of punishment.

Next, an unconscious Superman is discovered floating among the cosmos by healers. They cannot revive Superman because he’s battered past the point of no return. Now, if you’re the fighter who put the whoopin’ on Supes, you’d feel like an idiot.

The healer formed a bond with Superman when he tried to save him initially.

Once he learned of his patient’s epic heroism, the healer is inspired to no end and sacrifices himself to save the Man of Steel.

Again, this was also beautifully illustrated; however, all of the memories the healer experienced occurred on Earth. Why would anyone trade their life and in the process cause their family utter pain for someone who did great things on another planet? It’s easy to see what Tom King was going for here. It works well in the abstract, but it’s an epic fail once you actually think about it.

Superman’s journey to save the girl is piling up some collateral damage.

That comes with the territory in comic book storytelling. However, the narrative consists of good ideas that were well executed. Saving the girl is the endgame, but the choices implemented by King makes the reader question if perhaps Superman made the wrong decision. It would be a fascinating concept if it will be explored.

The casual nature of these re-released giant-sized Walmart exclusives makes me cautiously pessimistic the emotional cost of this mission will be a significant plot point going forward.