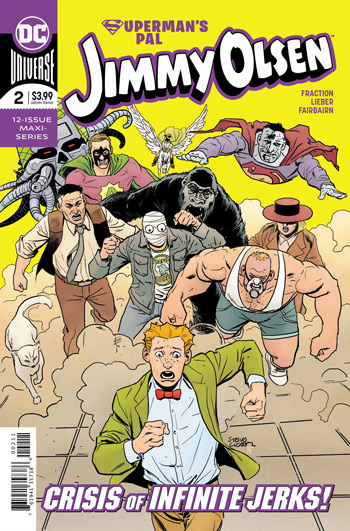 The first issue of this book was super crazy but highly enjoyable. This issue follows suit. The book has a nice and zany tone that puts a smile on your face as soon as you crack it open.

It’s not a book that is going to change the world or anything but it is incredibly fun for sure!

For the opening chapter,  we are treated to a tale of Joachim Olsson, Jimmy’s distant relative. He is walking along the snowy landscape into a bar. It’s a short scene that is pretty funny, especially when we see Lex Luthor’s relative “Luthais Alexander.”

Their encounter is pretty entertaining and sets the issue off on the right tone.

From there we get a story about Jimmy and his older brother Julian Olsen.

They have a conversation which leads into Jimmy telling Julian how he got a famous shot of Lex Luthor. It’s a pretty cool scene, and Fraction and Lieber keep the tone light. But Julian still seems pretty mad.

What does he have to be mad about?

Well, Metropolis is changing. And not necessarily for the better.

Julian then explains to Jimmy why his younger brother is the most dangerous man in Metropolis. The funny thing is that Julian has some interesting points here. This just adds to the fun of the story.

Superman and Jimmy then meet on a rooftop. They have a nice conversation. Fraction’s dialogue and Lieber’s art work perfectly together here. It’s a nice scene that serves as a counterbalance to the other wackiness of the issue. The craziness resumes after this scene however and it’s a bunch of fun.

By the end of the issue, Lex Luthor makes a move.

And Jimmy’s path takes him to Lois Lane. What’s going to happen from here?

I don’t know because that’s where the issue ends. But I’ll be reading this next month for sure. The writing and art are great and this is an unexpectedly highly entertaining comic book!