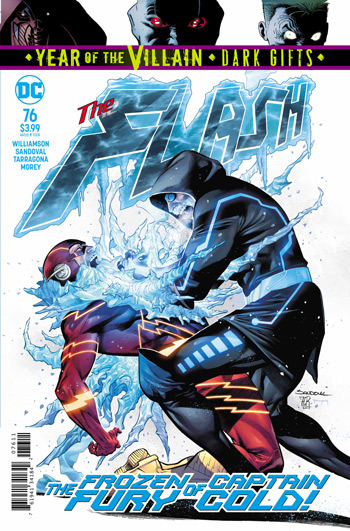 This is another fantastic issue by Joshua Williamson with art by Rafa Sandoval.  What I truly enjoy about this, is that one really great storyline has just ended.

Now, this creative team has a new storyline that they are starting. And to be honest, it’s pretty spectacular.

This issue starts off with the some of the sidekicks of the Flash getting a beatdown by some of the rogues. Things are looking bleak.

That’s when Barry shows up to the rescue and saves them. It’s a pretty heroic scene that gets the issue going.

It doesn’t last long, though, as things get pretty dark fairly quick.

Barry shows off the Flash Museum that he has rebuilt. He has even built a Speed Lab. It’s like a sort of Batcave but for speedsters. It’s fairly cool and well thought out. I love this concept. The scene is full of joy and it’s very neat indeed.

But the Rogues are cooking some things up!

That’s when something horrifying happens. The Black Flash appears and looks to wreck havoc of some kind. We find out what he wants by the end of the issue.

And boy, do we get left with one hell of a cliffhanger. Then, we find out the title of the book and it’s called “Death of the Speed Force.”

Its an ominous title. Who knows where the creative team will take us from here?

But with some excellent writing and some spot on artwork, this book really delivers. I’m excited about the possibilities ahead and the fun yet to come.