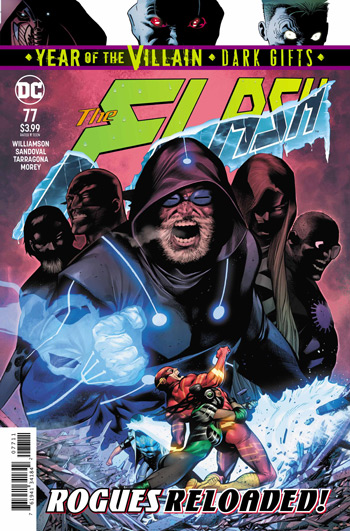 Joshua Williamson has been doing an incredible job on this title.

He had a plan from the very beginning from when he took over writing this book and it shows. Every issue is fantastic on it’s own but it feels like it’s part of a larger storyline. It’s been a wonderful comic book to read and enjoy  every time it comes out.

Pardon the pun, but it really has been a great run!

The Flash’s Rogues start off the issue by having a meeting and talking over some plans. It’s an ominous scene and it has a certain menace behind it.

What are the Rogues up to this time?

I wasn’t sure from the outset but they seem to have something big planned for the Flash.

While this is going on, Barry is fighting the Black Flash in a big battle! It’s awesome!

The Flash races to save his friends and the Black Flash is trying to kill them all!  This scene is especially well illustrated by Sandoval. This is a race and Sandoval does not hold back. It’s well designed and extremely well executed.

The Black Flash chases them all around. They even go into the Flash Museum where the Black Flash wrecks havoc. They eventually lose him but quickly have to run to help Fuerza in her fight against King Shark. They help her but this all leads to a cliffhanger.

Where will this go? What’s going to happen to everybody? And what’s the ultimate goal?

The storyline is called “The Death of the Speed Force,” so it’s anyone’s guess. We will find out soon though I’m sure. Right now, I’m just enjoying the ride.