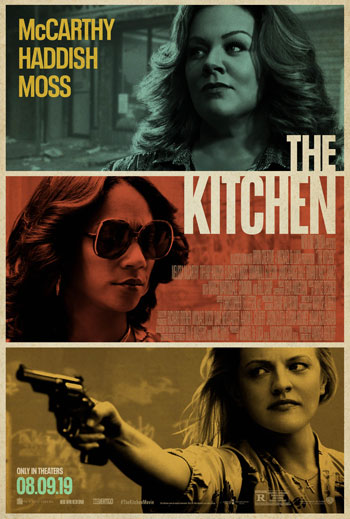 Given how much I love the comic book, The Kitchen, I had extremely high expectations going into this film adaptation.

Written by directed by Andrea Berloff, in her directorial debut, has woven a stellar, hard-hitting, gangster yarn about three women in Hell’s Kitchen.

After their respective spouses are caught and imprisoned by the Feds, Kathy, Ruby and Claire realize that instead of being content with the miniscule handouts they are given by the new kingpin of the neighborhood they decide to take matters into their own hands and start collecting and offering protection to the locals themselves.  They find respect and trust does not come easy but eventually through brutal and very calculated methods the three women run the rackets and protect their hood with more efficiency and ruthlessness than their husbands would have ever thought possible.

They quickly realize that with great power comes great responsibility. The pressures of running things starts to take it toll on the three women. Paranoia begins to threaten their friendship as well as what they have built. When their husbands are released early they threaten to destroy everything Kathy, Ruby, and Claire have built.

Using the DC Vertigo comic book, brilliantly written by Ollie Masters and gorgeously illustrated by Ming Doyle as a base, Berloff takes the initial concepts and ideas of the comic book and runs with them. She fleshes out even more, the fully realized the world of the late 70’s that Masters and Doyle envisioned. I thought it would be impossible for Berloff to outdo the imagery of the rich and gritty Hell’s Kitchen they captured in their book but let’s just say the film of The Kitchen actually made me miss the dirty old New York City. After I finished the comic book I wanted to take a shower. After the movie I wanted to shower and wash my clothes. Berloff and her cinematographer, Maryse Alberti (Creed) truly capture the essence of 70’s NYC and you could compare images from this film to shots from Taxi Driver, Serpico, and The Warriors and not know the difference.

The film diverges from the comic book often and I thoroughly enjoyed every time it did. Normally I think that adaptations can’t live up to the original source material. I was pleasantly surprised by the film version of The Kitchen. I didn’t think it was possible to improve on perfection ,but Berloff definitely has.

The casting of the three wives is brilliant. Melissa McCarthy delivers an Oscar worthy, riveting performance as the once hapless wife of an Irish gangster, Kathy Brennan, I was so impressed with her turn in a dramatic role I hope she does more. I have enjoyed this performance more than any of her comedic roles combined. Tiffany Haddish as Ruby O’Carroll is amazing. As a black woman married to an Irish man she has had her fair share of hardships and more. She is able to funnel all those obstacles into a no nonsense, hard as nails, mob boss, as ruthless as she is beautiful. Rounding out the three is Elizabeth Moss as Claire Walsh. She has the most dramatic turn from mousy, abused housewife to one of the most deadly hitwoman in the city.

Along with a stellar supporting cast, The Kitchen delivers the goods. They took a phenomenal story and translated it into a gripping, and entertaining mob film with a twist. The comic is now available at your local comic store in graphic novel format and once you see the film, if you haven’t already read the graphic novel I recommend you do. You will enjoy the heck out of it.