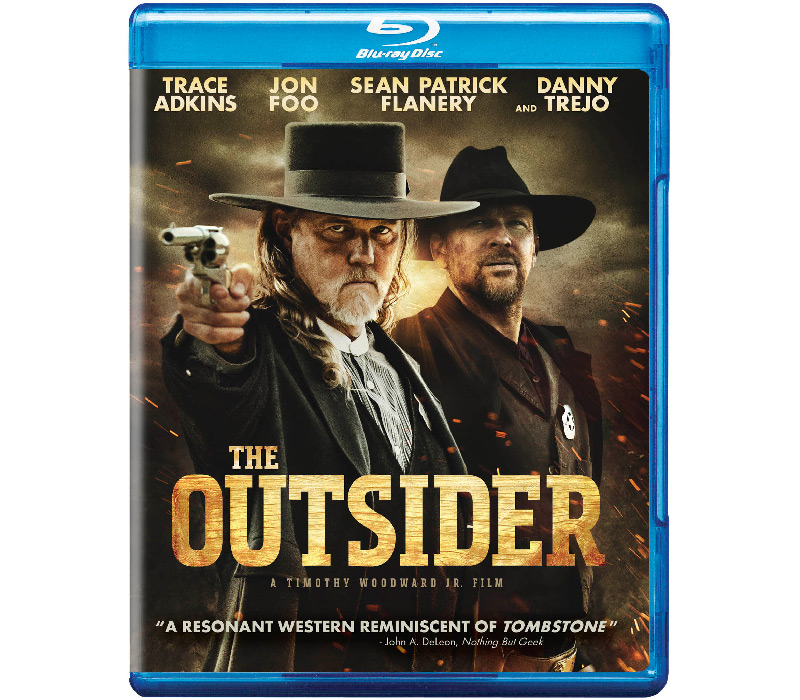 Outlaws beware. Through hard work and sacrifice, the pieces of Jing’s life begin falling into place, but in one moment all of that is ripped away. Enraged with grief, he sets out on a path of revenge that will tear apart the corrupt town he calls home in THE OUTSIDER. This double barrel thrill-ride stars country music legend Trace Adkins (I Can Only Imagine, Hickok), Sean Patrick Flanery (The Boondock Saints, Powder), Jon Foo (“Rush Hour”) and Danny Trejo (Machete, Predators).

The far east and the old west collide in, THE OUTSIDER, a tale of bullets, bare knuckles and bloodshed. In search of a better life, a railroad worker (Foo) unwittingly finds himself on the wrong side of a group of corrupt lawmen. As the Marshal (Adkins) attempts to control his increasingly unethical town, tragedy strikes forcing him to decide between justice and family. But through their inaction they awakened a sleeping giant; and after teaming up with a disgraced former officer (Flanery), the railroad worker sets out to wipeout the immoral group by any means necessary.

THE OUTSIDER, directed by Timothy Woodward Jr. (Hickock, Traded) and written by Sean Ryan, is an unfiltered look at the trials and tragedies that shaped the American frontier. Co-stars include Kaiwi Lyman (“American Horror Story”, Hickok) as the Marshal’s son and Mitchell L. Johnson (Jurassic World: Fallen Kingdom) as a corrupt lawman. Nelli Tsay (Jaded) rounds out the performances with the complex, gritty portrayal of Jing’s wife.

To enter, send an email with the subject header “OUTSIDER” to geekcontest @ gmail dot com and answer the following question:

Sean Patrick Flanery is one of 8 actors to officially play this iconic professor/adventurer onscreen?