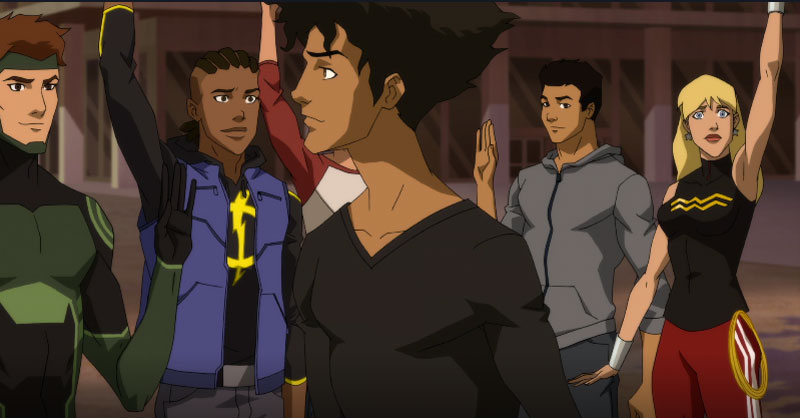 S03E19 — ELDER WISDOM: The Outsiders face Lex Luthor’s machinations. But Lex (MARK ROLSTON) isn’t the only one trying to manipulate them!

It’s clear to me why this season of YJ couldn’t be on Cartoon Network, and you’ll understand shortly. The “A” plot of the episode deals with the newly minted Outsiders taking on Klarion, the Witch Boy (who reads much better in comics than he translates on tv) who is using chaos magic to activate metagenes in teens and creating some kind of weird monster.

Thanks to Zatanna’s help, they bring Klarion and Teekl down and rescue the teens. A couple of quick notes here before I move to the “B” plot. The incident takes place in Cuba, and so the League is forbidden to get involved (which is why the Outsiders are sent in…even though they are secretly League sanctioned). They make a big deal of Zatanna’s involvement for a few seconds, only to make sure the audience knows the whys and hows. As a result of their actions, the Outsiders are trending globally, making them more popular than the League (which, they make a kind of big deal about, but truthfully…yeah, no kidding. The world is down on the League as it is, without G. Gordon Godfrey’s show, so anyone doing anything positive would pull from the League’s Q rating).

The other plot involves Halo who finds out she is slowly dying. Word to the folks writing the show…IF YOU DIDN’T KILL HER EVERY TIME SHE APPEARED, MAYBE THIS NEWS WOULD BE, I DON’T KNOW, SHOCKING INSTEAD OF BEING THE LEAST IMPORTANT THING THAT WAS SAID IN THIS EPISODE. What this does, however, to the character of Violet/Halo is give her a sense of impending finality; she starts ditching training to hang out with Harper Row (remember her from earlier in the season?). 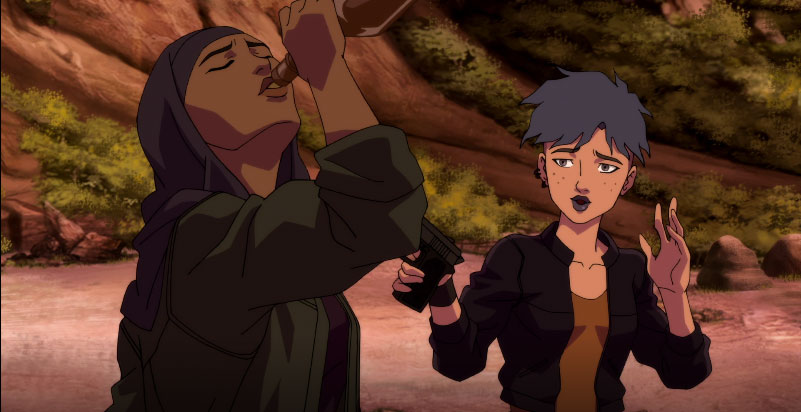 The two are on the beach, shooting guns and drinking cheap hooch when suddenly, Harper kisses Violet on the lips. Violet says she has a boyfriend, and Harper counters with the same information. Violet takes the gun and shoots, when suddenly a cop shows up and is pointing her gun at Violet.

Let’s stop there and take a step back. While this is clearly the smaller plot of the two, it is definitely the one where we see the most happen, character wise, as we not only see an extension of Halo’s non-binary sexuality, but also, we see a cop pull a gun on a non-white Muslim (although, Violet states to Harper that she’s not Muslim) teenager. I know I slammed the writing staff for the constant death and resurrection, but you have to give them credit for not “staying in their lane” and actually writing about SOMETHING other than costumes punching costumes. This, right here, is why you couldn’t show this on anything but the internet. Domestic cable television still considers cartoons the realm of children (with some exceptions like The Simpsons and Family Guy, et al) and there’s no way, NO WAY, in the age of constant media outrage that this would have EVER flown on Cartoon Network or the like. Just like they did with Doom Patrol, this is DC Universe doing what they do best; cater to the audience that pays for content. I feel like this will pay off with the upcoming Harley Quinn cartoon, as well.

The UN is holding a conference in Bwundasa, which means Lex Luthor is in town, but the Outsiders are there as well and at almost 4:00 minutes in, they have Halo’s throat slit. FFS, this show. You could set a watch to this shit. All the training these characters supposedly do and this one still…STILL…hasn’t learned an ounce of defense??? 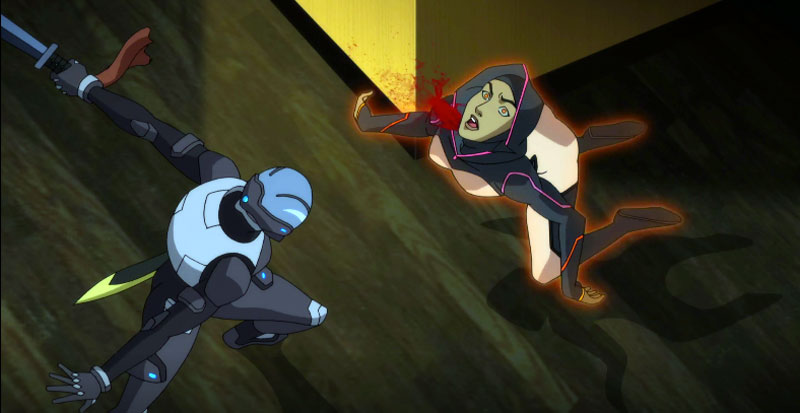 Anyway, the entire exercise was coordinated by Lex as a means to defame the Outsiders publicly, and I have to question why he felt this was necessary. I mean, calling them kids or children is one thing, but what does he stand to gain by making them not trend? It seems super petty, and I don’t mean that in the sense of the character’s pettiness; I mean it from a writing standpoint. This doesn’t feel like Lex Luthor to me. Which is why he gets spanked by Godfrey later in the episode. Godfrey, remember, is one of Darkseid’s lackeys, which makes him almost superior to Luthor (don’t tell Lex that, though). Lex realizes that his tactics need to change. 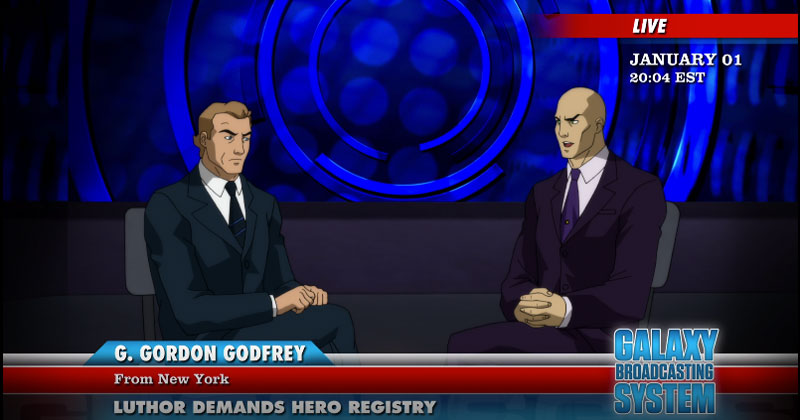 Halo comes cleans to the Markovs about her involvement in their parents’ deaths, which I think means that she and Geo-Force broke up?

Finally, you find out that the entire operation that the Outsiders went to Ireland for was basically a set up by Batman and company…which doesn’t sit well with Wonder Woman. 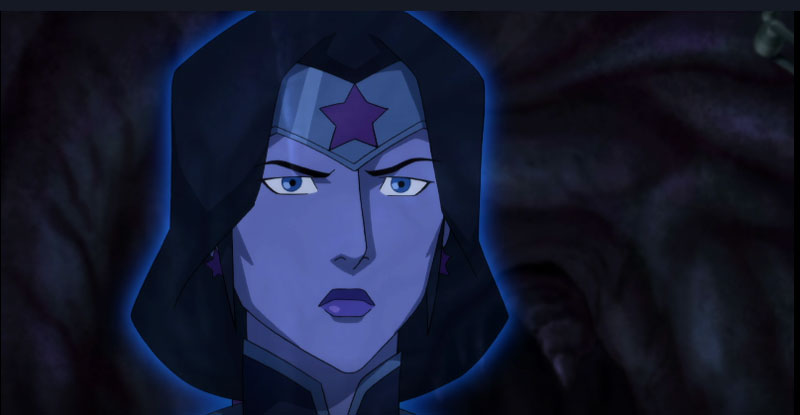