S3:E22 — ANTISOCIAL PATHOLOGIES: The betrayals come fast and furious, and with them, a reckoning…

The amount of Boom Tubing in this episode is such that titling it, “Quiet Conversations,” is a mislead swerve if ever there was one. There’s a lot going on in this ep, so I’ll break it down into small digestible chunks.

Vic Stone hasn’t been completely purged of Father Box, so Superboy, Black Lightning and Forager, on recommendation of Beautiful Dreamer of the Forever People, Boom Tube around the universe looking for Metron.

Shout out again to Phil Bourassa because this is the best I’ve ever seen Metron look. 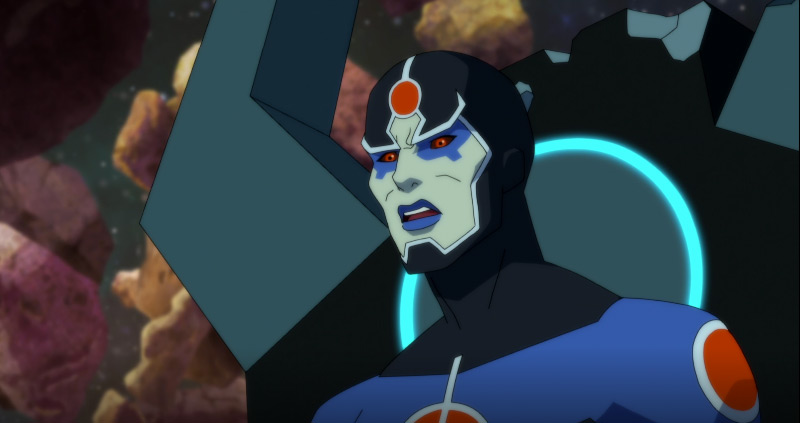 Anyway, Metron’s Moebius chair is the key to purging Father Box from Vic, but in the process, his tech is now replaced with Moebius tech. Not sure what that means, but we will find out. While tubing, Superboy and team find Superman fighting Parademons. There, after defeating the baddies, Kon asks Kal to be his best man. Aquaman(lad) takes who I assume is going to be Dolphin to Poseidonis to meet his parents and get mentored by them (sort of like Kon and the Kents).

Here two curious things happen; first, he introduces her to his parents (but isn’t his dad Black Manta? NEW DAD WHO DIS?). Then, we see our first male on male kiss as Kaldur kisses someone who looks like Tempest, but I’m pretty sure I’m wrong. 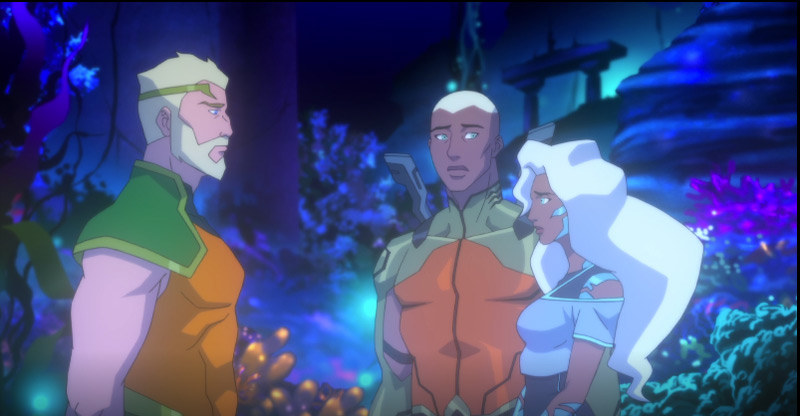 Elsewhere, Violet/Halo gets through an episode without dying but runs away to see her (or, Gabrielle’s) mother and say goodbye. Terra is still being a little shit, but you can tell she’s having some doubts. Finally, Megan has a heart to heart with Harper Row about the abuse she and her brother are receiving at the hands of her father. 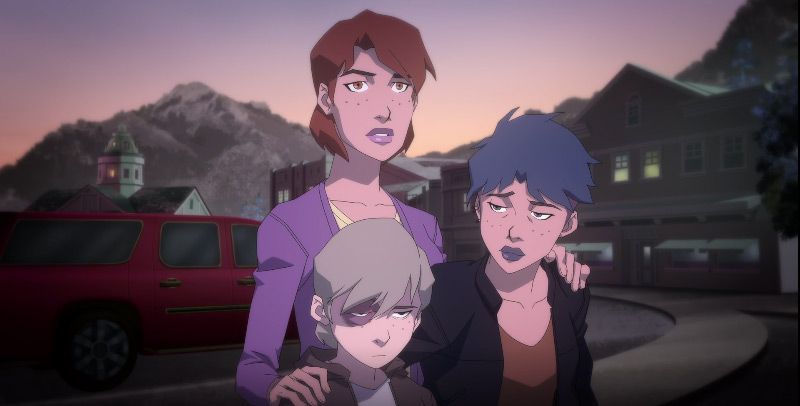 The end of the episode is tagged with a National Domestic Abuse Hotline ad, which is a nice touch, truly, but Jesus, with the amount of times Halo has been killed on this show, I feel like we could have put this at the end of EVERY episode.

Wasn’t crazy about this episode, as it felt really light on plot (or maybe too heavy since there was so much going on), but at least some of this felt like closure. With six episodes remaining, you kind of want that with some of the cast, but it’s a tough thing to balance, but…

Less subplots in this one, but some key info gets leaked.

Nightwing and Black Lightning break into the house of Gretchen Goode (ie, Granny Goodness). Suddenly, they’re not there. 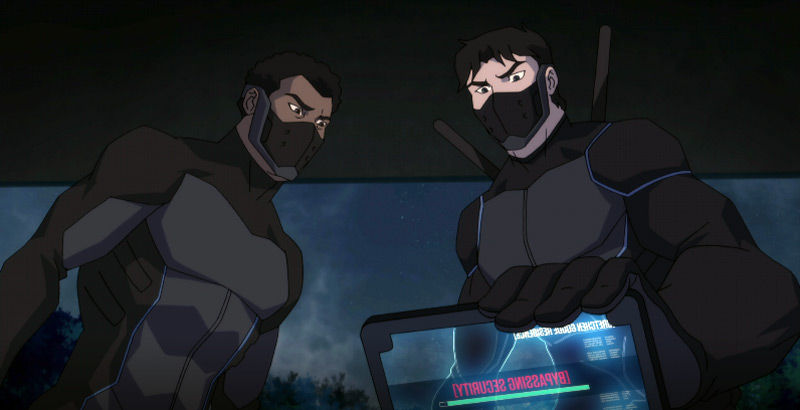 Oracle calls in Aquaman and his partner, Wyynde (ie, not Tempest). They take on Granny head on instead of trying to sneak in. It’s an awesome tactic and it’s why Kaldur is a great leader; he doesn’t do things like Dick or even Superman. Granny has trapped NW and BL in the X-Pit run by a supercomputer called Overlord (he’s a wee thing that lives in a little decorative box in the corner and looks like Brainiac).

Here, Dick and Jefferson get “reconditioned” and bent to Granny’s will. When she tries to destroy the Mother Box the team has been using since last ep, Vic and Violet get pinged, so they (along with Gar and Brion) boom tube to Gretchen’s (sounds like a B-movie title) and make the save. Key info #1: When Violet is purging Dick and Jefferson of Granny’s conditioning, Granny notes that Violet is speaking in the language of “the Old Gods.”

Meanwhile, Mal Duncan and Karen Beecher (aka, Guardian III and Bumblebee) are having a baby. I was kind of thrown by this because these two have hardly been around this season (in fact, I did a little research and Mal was seen in two episodes prior to this, 1 and 16, and didn’t have a line in either). 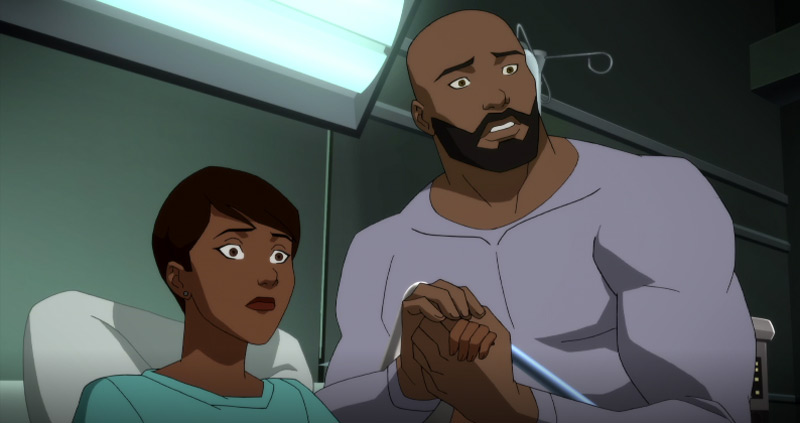 It seems like they were just thrown in randomly, as if the fans were clamoring for them…which they may have been doing, no idea. But on this side, it seemed like an odd inclusion…until Karen has the baby.

The baby is born with a hole in her heart and all indications are that she might not make it. Using (Ray) Palmer tech, Karen shrinks down to microscopic size to fix the hole…but not before she pulls out a vial of fluid that may alter her daughter’s DNA to be a meta. It’s left somewhat ambiguous, but I think Karen more or less admits to it when she says something along the lines of doing anything for her baby. I can’t say it yet, but genome altering? That’s probably going to come back somehow. 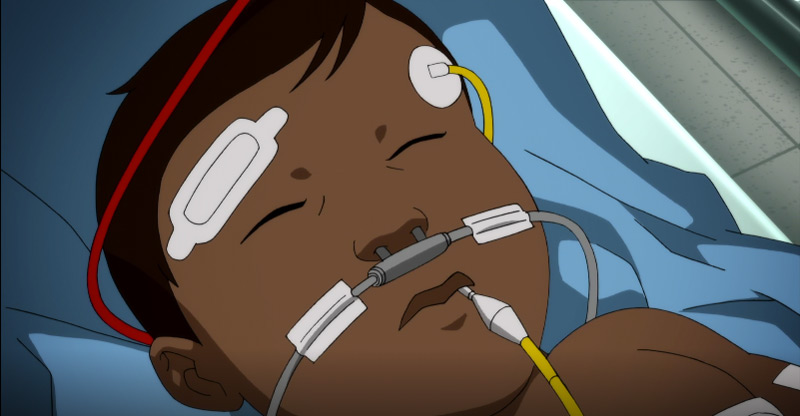 Post Credits Sequence gives us Key Info #2 (or 3): Granny communicates to Darkseid that she has found the Anti-Life Equation. 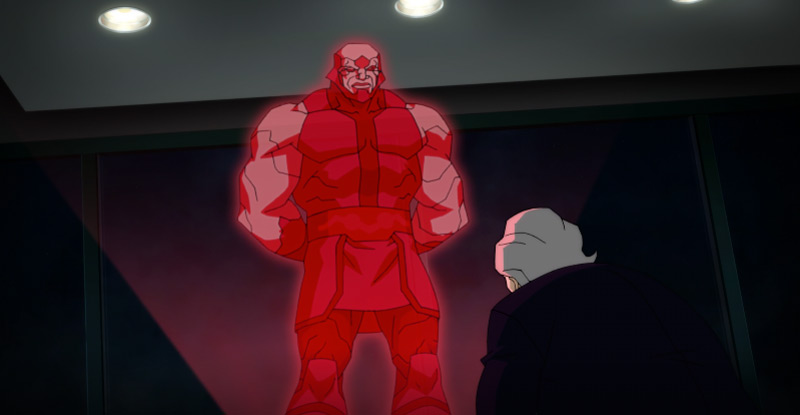 Ok, I’m kind of reeling from all the yelling that happened in this ep, but let me do my best to recap. Possibly the most important episode in this trio, for sure, and I fear I’m going to be jumping all over the place with my words, so forgive me.

Nightwing is dying after being exposed to the X-Pit (I think I missed the explanation for why Jefferson was ok), and that brings in the entire Bat-Family in their civvies, even Bruce. 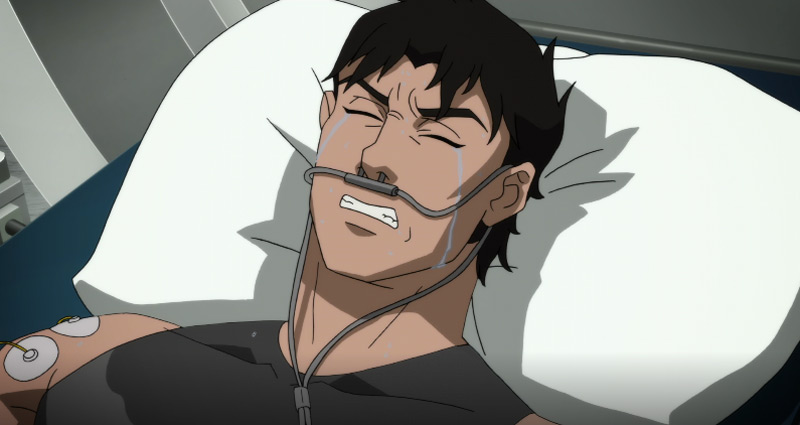 Jefferson susses out that Batman quitting the League, Nightwing going rogue…all of it (which means, all of this season, basically) was a lie. And he goes OFF on everyone in sight. Gar does too, when he finds out that some of the Outsiders missions were layups set up by the League. It’s messy, just like any Thanksgiving argument or high school break-up.

A lot of accusations get thrown, mostly at Batman. So, while the heroes are kind of falling apart, the Light and, by extension, Darkseid and his minions are pulling together. 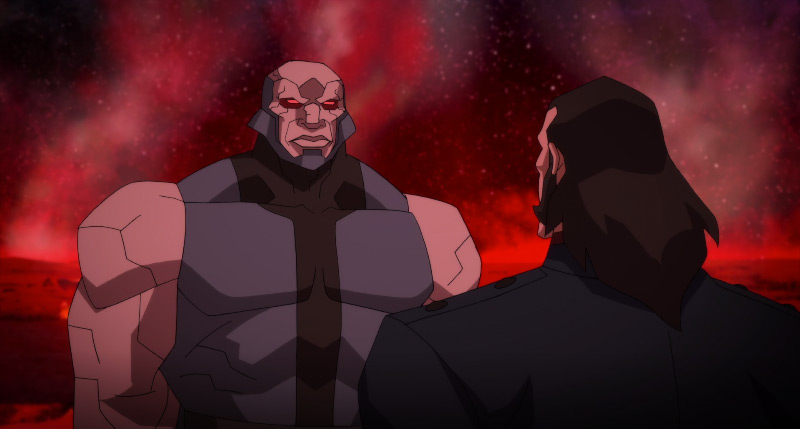 Halo IS the key to the Anti-Life Equation and while Jace and Ultra-Humanite have a deal, Darkseid’s desire trumps any deal. Granny takes Halo to the Orphanage where we see her face to face with Granny-WTF is going on here-Goodness!

Right before this happens, Dr. Jace kidnaps Halo, Brion and Tara. Tara gets free of a control chip (thanks to Slade, whom we see has more of a fatherly relationship than the creepy sexual relationship from the comics), and she is privy to all of Jace’s secrets, which get back to Batman and, unfortunately for him, Jefferson. And it seems like the Light is having second thoughts about their connection to Darkseid. 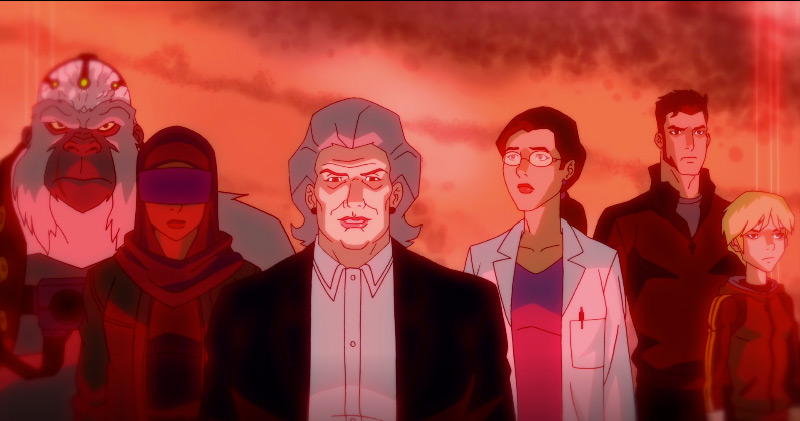 So, here at the end of the ep, it seems the heroes have the means to come together while the villains are about to fall apart. It’s a great balance in an episode this close to the season finale. There are a lot of interpersonal relationships to keep track of in the entire series, and it’s a blessing that, through Jace’s exposition, we get to see a lot of how certain pieces fit with each other. It’s also extremely convenient. What I mean is there’s not a lot of nuance to how Halo connects to GeoForce or how Jace created GeoForce to get Terra back, but it’s never a bad thing to have some blanks filled in. 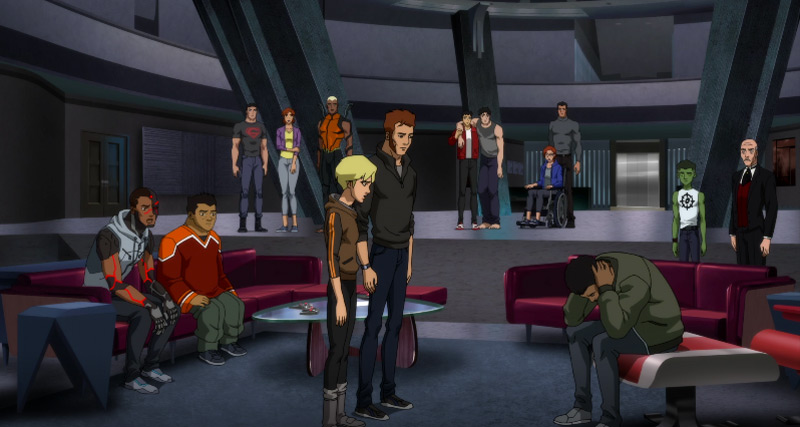 And, while I always thought Jace would turn out to be on the side of devils, I didn’t expect her to be so friggin’ creepy about it. Try not to cringe as she calls the Markovs her children.