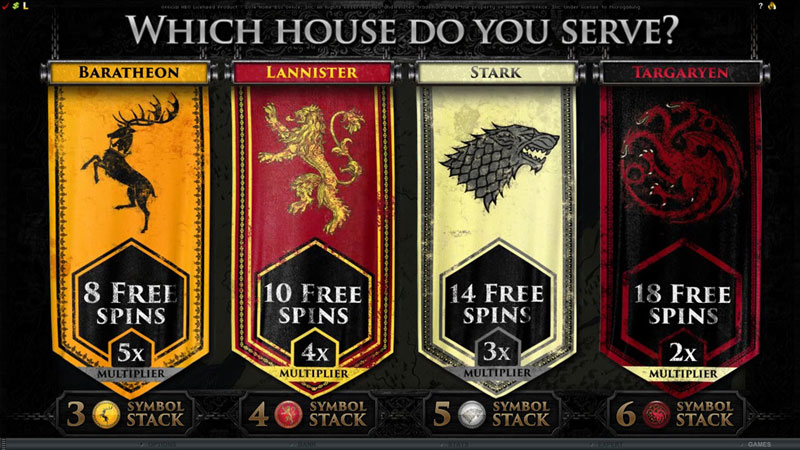 We are living in the age of TV shows and no one can deny that. In the past decade or so, we saw a huge increase in the money invested in such productions. That brought us many epic titles like “Game of Thrones”, “Vikings”, “Stranger Things”, and countless other TV shows.

Their popularity and cult following impacted many other industries. Today, I will focus on the world of internet gambling. Some of the best online slots casinos offer games that are inspired by classic TV shows.

They provide a lot of entertainment and the opportunity to enjoy favorite characters. Let’s take a closer look at the best 7 online slots based on popular TV shows.

The less we talk about the last season of “Game of Thrones”, the better. The fact that more than 1.5 million people (and counting!) have signed the petition to remake it with a different team of writers says it all.

And yet, we shouldn’t forget how good the show was for so many years. It brought us a bunch of fascinating characters, many painful deaths, and captured our imagination. That’s why I feel obliged to add this game here.

As soon as you launch the GOT slot, you will see recognizable places and characters, as well as the epic intro music. The title features over 200 ways to win and a total of 15 paylines. There’s a scatter symbol, four thematic side games with free spins, and many other surprises.

A lot of beloved crests are part of the Game of Thrones slot, as well as other symbols that are related to the show.

“Family Guy” is another TV show that may have lost some of its appeal recently, but simply gave us too much for decades to ignore. I’m not sure what my favorite episode is, as there are so many of them.

If you like the Griffin family and all the other weirdos on the show, you should certainly enjoy the slot of the same name. Every member of the crazy family is a symbol on the reels and there are seven bonus features that are related to some of the characters. 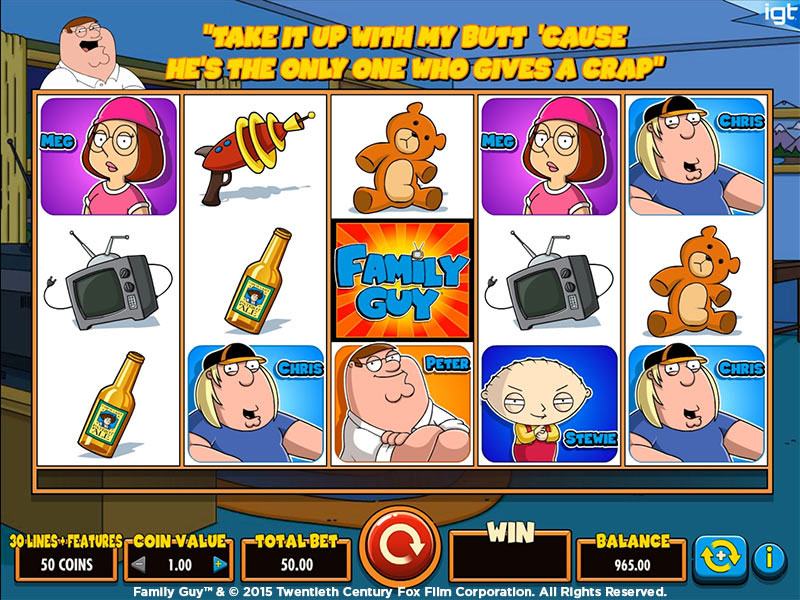 I won’t spoil the fun, but let’s say it includes Peter and a certain Giant Chicken engaging in a fight! The creators did a great job and the spirit of “Family Guy” is certainly part of the game which is the reason it has found a place on this list.

Since we are talking about cult animated TV Shows, “South Park” is next in line. The fans will be happy to hear that there will be new episodes until at least 2022. The four main characters and all of their surrounding cast will return for even more satire of everyone and everything.

If you like the show, you will most likely the slot machine. It features Stan, Kyle, Kenny, and Cartman as symbols, but that’s just the beginning. There are side games inspired by “South Park” that will certainly make you laugh.

In one of them, Stan pukes on Wendy and Cartman is on the hunt for hippies in another. You will even be given the chance to somehow prevent Kenny from being killed. Good luck with that!

One of the most visually appealing games on this list most certainly is the Vikings slot. It’s based on the popular History Channel show and features exceptional graphics, sound, and animation.

You will see characters like Ragnar, Floki, Lagertha, and Bjorn both on the reels and in the many side games. There are plenty of extra features that add a lot of entertainment value to the slot and a jackpot that could return 10,000 times your initial stake.

The overall feeling of the Vikings loss certainly offers an excellent experience both as a standalone game and as a branded product.

Ever since its first appearance on the small screen in 2002, “American Idol” has been one of the most popular TV shows in the United States. Some people like it for the laughter in the early stages, others simply want to see the next big star.

We’ve seen plenty of talent there throughout the years and the fame of the show was the reason why the American Idol slot was launched in 2012. While the design is a bit outdated today, the game still provides solid entertainment, especially for fans of the show.

It features some classic gameplay mechanics, including bonus games and scatter symbols. On top of that, you will see some of your beloved or hated judges, like Simon Cowell, for example.

Another game that has been around for a while is the X-Files slot. The cult TV show is one of the best when it comes to combining mystery, paranormal activities, conspiracy theories, and other favorite topics for any true geek.

The game successfully recreates the dark atmosphere of “X-Files” instantly. The background is a creepy old forest and a lot of the symbols on the reels are related to the show. Naturally, both Mulder and Scully are part of them.

The gameplay is relatively simple, but it does feature some free spins and multipliers, so you won’t be bored.

I can’t resist the temptation to include the Baywatch slot to the list. After all, it’s the TV show that catapulted the career of Pamela Anderson. And who could forget the manly man Mitch Buchannon, portrayed by David Hasselhoff himself!

The dialogue, acting, script, and pretty much every aspect of the TV show is of questionable artistic quality, but it certainly left a mark in the popular culture and plenty of meme opportunities.

It’s no surprise to see a slot machine that’s named after “Baywatch” and it features a lot of the iconic characters from the show. If I have to be completely honest, it’s not the most innovative slot title you can find on the internet, but that’s probably appropriate for this particular show.

Still, the game is solid and its main strengths are the characters of Anderson and Hasselhoff. They will provoke a lot of giggles, so I would recommend at least trying it.