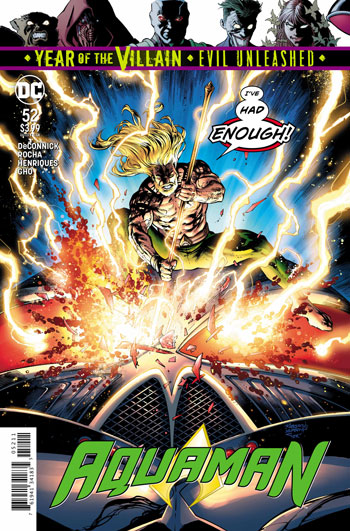 There’s an attack by a sea monster on Amnesty Bay, Maine and Aquaman, Aqualad, Caille, and crew are ready to defend the lighthouse at any costs.

Jackson is quickly in the fray with water bearer swords, chopping away tentacles as the beast battles and thrashes with it’s limbs from all angles. Arthur is still not sure what to do with Jackson, who looks up to him and uncomfortably forces a hero sidekick relationship, even in the midst of battle.

Jackson quickly realizes that being a hero is not all it is cracked up to be when someone gets hurt under his watch.

In a neat little call out, we discover that even though this creature is of the sea, it doesn’t respond to Aquaman’s psychic call that he uses to surf on dolphins.

Is it an alien or just too powerful?

The battle is intense and lasts nearly the whole issue. Aquaman spears the creature with his trident and is then thrown violently into the lamp of the lighthouse. The monster disappears.

There also are moments here with Black Manta taking control of his ‘Year of the Villian’ robot Black Manta as they explore a yet to be revealed trench that may be Atlantis or another under sea city. He uses this opportunity to test the firepower of his new weapon, gearing up to go after Aquaman. It is after all, the Year of the Villain!

At the end of the issue, Arthur is talking to a mysterious hooded man in the aftermath of the big battle. The town of Amnesty is picking up the pieces, literally in some cases as the top of the lighthouse needs to be repaired. All of the townspeople have been affected by this monster attack, and maybe next issue we will find out why.

The mysterious figure is the storied lighthouse keeper Tristam Maurer, gone two hundred years. More about his disappearance, and apparent immortality next issue, we presume!

This was a good issue that had a satisfying ending to the big monster threat, but I am starting to wonder if the book is straying too far away from Atlantis and the resolution between Arthur and Mera. Or, alternatively maybe that is coming soon. I won’t complain about not having a romantic resolution when we get a many tentacled monster battle resolved. I’m still interested in seeing where Kelly Sue takes her run on Aquaman which has dips in excitement sometimes, but in general is the longest single run of Aquaman that I have stuck with. Robson Rocha delivers not only the DC house style, but also great action and expressive characters.

Next issue we see what Year of the Villain masterplans Manta has as “Black Manta Strikes”!