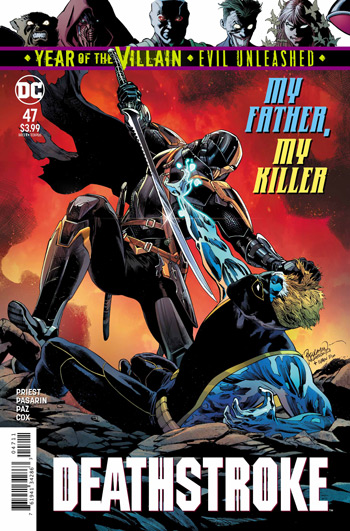 Man, Christopher Priest has really taken this title into an amazing and interesting direction recently.

This issue has a really cool twist right at the beginning and it only gets better and better. I love the writing on this book and the story is one of the most twisty and intricate plots that I have ever read!

After an opening sequence that is particularly nightmarish, we get right into the story. Slade Wilson wakes up in bed.

This is particularly strange as Slade was dead in the last few issues.

How is this happening? Why is he alive suddenly?

Priest wastes no time getting things going in an interesting and fun way.

There’s a young man giving Slade answers to what is happening to him. But who is this kid? And how does he know so many things?

Slade decides to call Damian Wayne asking for a pickup. This scene is hilarious and does not go the way Slade had hoped. I laughed out loud here and it’s a great start to the issue.

From there, we get to see Joseph flex his powers. But maybe he isn’t cut out for this hero thing. We then also get to see a cool scene with Rose fighting Emiko asking her why she killed her father. Then, something beautiful happens. Rose just forgives her. And it’s a simple, yet poignant scene.

Slade then gets his costume on and goes back into the world!  He commits a cold blooded murder and then he is on his way. There is even a nice little cliffhanger that leads into next issue.

Priest is still doing incredible work on this title. The stories are tight and well developed. And the art here is fairly strong too. It’s only getting better with deeper stories and plots with every issue. It’s been a great run thus far and this is another fantastic issue in that run. Keep them coming!