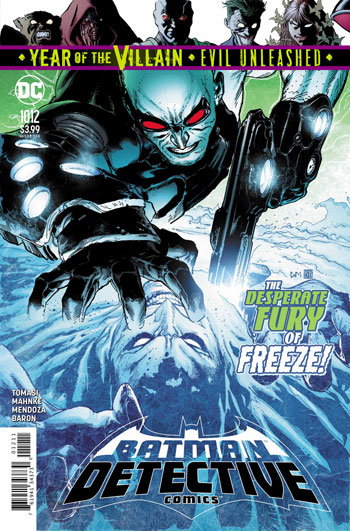 This was an another amazing issue!

We start the issue off at the Gotham Dockyard. Batman is recounting to himself the first time that he tussled with Mr. Freeze. It is snowing outside.

Batman holds out his hand. He catches a few of the snowflakes. He knows that a confrontation with Freeze is coming. He is just preparing for the inevitable.

We then go over to the Gotham Pine Barrens.

We see that Mr. Freeze is doing the same as Batman and collecting snow flakes into his hand. Freeze is talking to his wife Nora who he is always trying to resurrect. He is preparing. He knows that a confrontation with Batman is coming as well. He is just getting ready for it.

This is what makes Tomasi such a great writer. He sets up the story in a very simple manner and then delivers big time after this. The time has come for Mr. Freeze to implement his plan. He’s kidnapping women and experimenting on them.

It’s a pretty ugly storyline when you start digging deeper into it but it’s so well done that you literally can’t pull your eyes away.

The rest of the issue is leading up to the meeting between Mr. Freeze and Batman. It’s deep and perhaps a bit more deeper than Tomasi’s writing has been on this book. We get to see Freeze talking to his goons. We get to see Bruce angrily prepping. It’s some real intense stuff happening here.

Doug Mahnke is at the top of his game in this issue. There is an obsessive amount of detail in the artwork. It seems like he and Tomasi have been waiting to tell this story. This feels like it’s the beginning of  something truly special indeed.