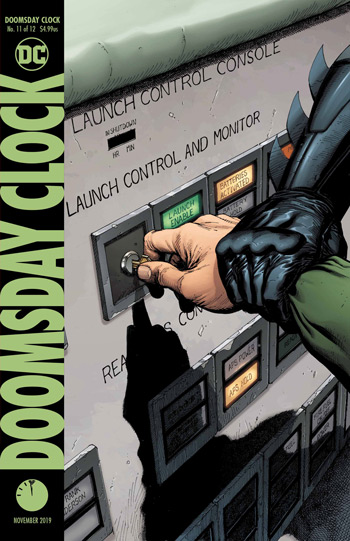 Reading this penultimate chapter of Doomsday Clock, one can’t help but think about what is transpiring over at Marvel Comics regarding the X-Men line.

Jonathan Hickman is in the midst of a truly visionary reimagining of the franchise, telling an epic, generations-spanning tale of rebirth, and of the narrative cycles within superhero comics find themselves trapped.

Geoff Johns is attempting something similar in Doomsday Clock.

It’s easy to compare last issue’s jaw-dropping reveal of the DC “metaverse” to Hickman’s reveal of Moira X. They’re both devices that comment on the endlessly circular nature of superhero comics.

(The backup text in Doomsday Clock #11 makes that all but explicit by having Lex Luthor point out his and Superman’s literal never-ending battle.)

But while Hickman is writing a sprawling, audacious science-fiction epic that reinvents and reinvigorates the X-Men and their world, Geoff Johns is writing a story that can’t help but break out of old patterns and habits.

Admittedly, it isn’t fair to compare the two stories, especially after I spent months already comparing Doomsday Clock to its most obvious parallel: Watchmen.

If anything, this chapter reinforces that notion–once again, as in the original tale, everything is revealed to be the result of Ozymandias’ plotting. He set everything into motion in an attempt to force Dr. Manhattan to save their world, and has manipulated events in the DC universe just as he did in the Watchmen world. Everything is about to explode once again as tension between the world and its heroes reaches its peak.

And yet, if you’ve been reading House of X, then you see just how elegantly a story like this can be told, and how Doomsday Clock falls short.

Even on its own merits, Doomsday Clock feels uneven.

Issue #10’s twist felt thrilling in a way the rest of the series hadn’t. For a moment, Geoff Johns succeeded in making us recontextualize the DCU and the stories it tells, by re-centering everything on Superman and exploring the tug of war between a creator and his audience. We were the DC metaverse, angrily correcting a fictional construct that had lost its way and forcing the storyteller to look inward.

Unfortunately, the storyteller had to return to the other, less interesting threads.

Black Adam is a threat, but reads as thin and underdeveloped. The plot thread of an ascendant, menacing Kahndaq has little impact compared to the more cosmic ramifications of the tale. Saturn Girl’s losing battle of wills with Ozymandias just feels like a prelude to the predicted–and predictable–return of the Justice Society. The Nathaniel Dusk material once again feels like a rehash of the Black Freighter.

Nothing seems to matter except for Superman finally meeting Dr. Manhattan.

Perhaps, as I’ve speculated earlier, this will all come together when all twelve chapters can be read, front to back, all at once. Or perhaps all of this is an empty exercise in resetting the status quo once more, in paving the way for the return of the JSA and the reintroduction of the Legion of Super-Heroes.

At least we’ll know for sure in two months.