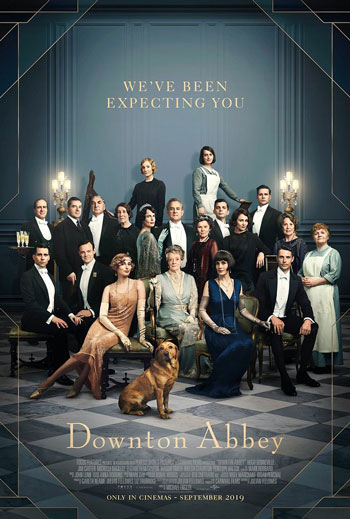 “Welcome to Downton, we’ve been expecting you”.

The film expansion of Downton Abbey starts nearly after we left the Crawleys in July of 1927. Rarely does a series, British or American, jump from the small screen to the big and the challenges of storytelling in both mediums are quite different. Without the luxury of an episodic return, the film must resolve itself by the end, and I am pleased to say that this one does.

From character development, comedy and even a bit of treason, there is a lot to enjoy from this film.

Fans of the show or those that saw the trailer know the main plot point is that the King George V (played by Simon Jones, TV and Radio’s Arthur Dent from Hitchhiker’s Guide to the Galaxy!) and the Queen Mary (Geraldine James) are coming to Downton for a visit.

The Crawley’s house at Downton is certainly equipped for such a visit, but Thomas is now the butler, replacing the retired Mr. Carson. Heir to the Downton legacy, Lady Mary is a bit nervous about Thomas being able to carry out these duties, and Carson is called back to the house. One thing that is vital is the sense of duty every member of the house, Upstairs and Downstairs feels toward serving at the pleasure of the King and Queen. Mr. Moseley is especially chuffed, and can barely breathe when the royal highnesses arrive at the circular driveway of Downton, which has of course, returned to the iconic shooting location of Highclere Castle.

There are several intertwining stories that make up the full picture of the movie, from Thomas getting to express himself as a gay man to Lady Edith and Bertie’s martial troubles (though, they do seem quite happy and Edith has grown into her marriage and role as an independent woman quite nicely).

Tom’s running an automobile shop in town but it seems as if his Irish Republican past has been knocking on his door lately. Of course the Dowager Countess and Isobel have at each other with loving barbs that are getting to be sisterly as well as quite funny, maybe funnier than these words have been in the past, or maybe I perceived this differently on the movie screen.

To that point, this movie is absolutely gorgeous, from the to be expected splendor of the period accurate costumes and dinner spreads to the sprawling overhead shots of the Abbey and the land surrounding it.

Cora and Robert are at the head of the table of course, and a threat to his peerage rears it’s head as a major conflict in the movie.

Of course, the major action all happens Downstairs as not only Thomas Barrow is asked to step aside, but in fact all of the Servants are asked to do the same when the King’s footmen, chef and staff arrive to serve the King and Queen. This takes the absolute honor away from Downton staff to serve their royal highnesses!

What happens takes a turn that is almost as ridiculous as a Keystone Cops caper and is hilarious on top of the chaos of polishing every spot of silver in the house along with the cooking and the cleaning. Daisy and Mrs. Patmore are still running the kitchen in 1927. Andy and Daisy’s love story continues in a cute way but that is not without it’s own unique challenges and threats from a handsome plumber!

Back to Thomas, briefly. Barrow learns of other gay men around him and also the dangers that gay men in society had to face at the time. In the end, this is a quite positive move for him, as Thomas has moved from being a villain at the beginning of the series to somewhat of a hero but the time we get here. Lots of people in the audience seemed very pleased that Thomas got his due, not only as butler, but as a respected man in this film. There was applause and gasps in the theatre!

Anna and Bates are quite happy now with their son and quietly keep the engine of behind the scenes, managing to keep everyone else happy and content as well, with their loyalties to the house never questioned as they prove themselves to be the backbone and spirit of the Downstairs world.

Fans of the show will not be disappointed, in fact they may immediately demand more! Going from such a popular series format to one movie after nearly four years wait to see how these characters are doing is too long. This has topped UK box office on opening weekend, so it appears that people are enjoying it.

Downton Abbey is the perfect escape, a history foreign to us by culture and nearly 100 years, but a world that’s not entirely removed from our own, we can see ourselves in the story and it is always fun to see how new technology is introduced and politics of the day are reflected as the series moves along with a long legacy.

Downton Abbey the film is superbly acted, intensely researched and beautifully filmed. Julian Fellowes is a treasure for having these rich characters in his brain and putting them down on paper. I hope the sequel is on the horizon, because this was in the top movies for me all year!