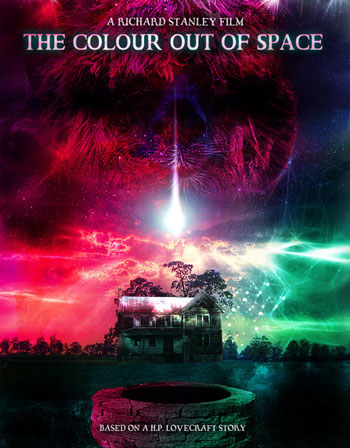 In Hollywood, H.P Lovecraft adaptations are a dime a dozen.

Rivaling the likes of Stephen King and Edgar Allen Poe in volume, Lovecraft’s influence extends even beyond direct adaptations of his work to direct influence, as seen in the works of the likes of Guillermo del Toro and John Carpenter.

Such is the case with Color Out of Space, an adaptation of the Lovecraft story of the same name, which falters in many aspects, but is still a visual treat that should be seen loud and large on the big screen.

Set in rural Arkham, Massachusetts, the film centers on the Gardner family, headed by patriarch Nathan (Nicholas Cage). When a strange meteorite crashes in their front yard, it begins to infect the nearby water supply. However, as the meteor begins to wrap their minds and bodies, the family begins to realize something else is going on, something much more sinister.

It’s a setup we’ve seen done to death: strange object from space crashes and has weird effect on people. The aforementioned Stephen King even tackled the same subject in The Tommyknockers, though I suppose even he’d admit he cribbed heavily from Lovecraft in this regard.

In that sense, Color out of Space has an uphill battle in the narrative department, fighting to find a way to keep the required progression of events fresh and engaging. This is where the film misses the mark in a big way. At almost two hours long, the paper thin plot is stretched to the breaking point, the narrative rubber band ready to snap at any moment.

It doesn’t help that the characters are woefully one note: neurotic working woman mother, 90s wannabe Wiccan daughter, stoner son, and Nicholas Cage as Nicholas Cage. None of them are particularly likable or charismatic, leaving us without anyone to really latch on to once the horror really ramps up.

Director Richard Stanley (Hardware, Dust Devil) is clearly much more of a visual director than he is an actor’s man, as the film is a gorgeous mixture of placid forests and neon lightshows. The contrast between the two aesthetics helps delineate the spreading of the evil, and by the end, the film goes for broke in an explosion of the titular color, enveloping the audience in the kind of psychedelic terror that threatens to be seizure inducing at any moment.

In that regard, Stanley has translated the indescribable terror that pervades all of Lovecraft’s work into the most plausible cinematic allegory: pure, unadulterated light and color that assaults our senses and makes us want to shield our eyes just as much as it transfixes us with its incomprehensible beauty.

If there’s further proof that the Internet meme canonization of Nicholas Cage has ruined him as a good actor, the only thing causing more destruction than the evil meteor is Cage from all the scenery he’s devouring. I’m of the unpopular opinion that Cage hamming it up is wildly uninteresting, but here it takes what could be eerie and unsettling and turns it into nothing more than caricature and self-parody. Every time Cage broke into his schtick, I immediately tuned out, cringing as the theater descended into uproarious laughter when I was poised to me on the edge of my seat from legitimate suspense.

Beneath all this, Stanley has retained the nihilism and futility that underlies any of Lovecraft’s terrors, the idea that evil is inevitable and all consuming. Stanley is very clearly a big fan of the writer, but it feels like the script needed a few more passes before being put to celluloid (or pixels to be more accurate).

This story can work on the screen, as the underrated Boris Karloff version of this same material, Die, Monster Die!, shows, but it needs to be tighter, more efficient with its storytelling. Lovecraft’s horror may be infinite, but audience patience for a film to spin its wheels isn’t.