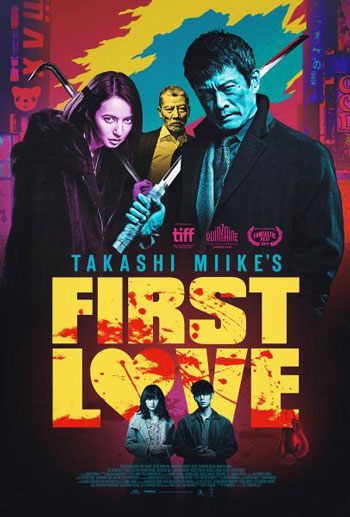 When one hears the word “hopeless romantic”, director Takashi Miike is far the from the first filmmaker that the average (sane) person would think of.

Through the course of his 50+ years in the industry, Miike has crafted films characterized by their controversial use of blistering ultraviolence, irreverence toward good taste, and generally pushing the buttons of those who wear their collar a bit too stiff.

However, his latest film, First Love, feels a bit out of left field for the director, embracing a classic tale of two young lovers who get in over their head, but instead setting this story amidst in a drug smuggling scheme gone awry, crafting an anarchic and darkly hilarious film that is at once cringe inducing in its violence and gut busting in its comedy.

Leo (Masataka Kubota) is a young boxer struggling to find meaning in his life after recently being knocked out in the ring. Things only get worse when he finds out that he’s got a brain tumor and doesn’t have much longer to live.

One night, he accidentally “saves” a fleeing woman (Sakurako Konishi). Before Leo knows it, he’s caught in the middle of a battle between the yakuza, a corrupt policeman, and a Chinese gangster. Now, not only does he have to get the girl, but he has to somehow survive the night.

There’s definitely a hodge-podge of comparison points here in terms of premise (Into the Night, Baby Driver, etc.), but Miike is definitely taking this pulpy yarn and spinning it in his own direction. Right from the start, there’s a palpable sense of melancholy to Leo’s character. He fights and wins without emotion, each victory yet another to add to his record. Yet, it’s the one loss that destroys him. He’s a man driven by the fact that he has nothing else other than his fists and his existence is ultimately an empty one.

Once he finds himself tossed into the bloodshed, he quickly must come to terms with what he wants. In contrast to most film romances, it’s not the girl to pushes him to find meaning, but the fact that he’s getting shot at, run into, or just generally getting the shit beaten out of him. It’s violence as therapy and in Miike’s world, that just about as emotionally cathartic as you can get.

The real icing on the cake here is the humor, particularly that brought on by Shota Shometani’s character of Kase. Whether he was doing it consciously or not, there’s a strong resemblance to Eli Wallach’s Tucco from The Good, the Bad, and the Ugly. He’s constantly annoyed at the messes he finds himself in, gets annoyed at the slightest inconveniences to his terrible antics, and is just generally a pain in the ass to anyone who gets stuck with him. I don’t want to spoil any of the best jokes here, but he pretty much is behind all of them.

In typical Miike fashion, however, there’s plenty of bloodshed to be found. Limbs are hacked, heads are severed, and multiple people are run over. Ironically enough, in the pre-screening introduction at Fantastic Fest, Miike himself said that he hoped the audience would like it because there “are a lot less heads rolling” in the picture than his other films. As someone who isn’t a Miike expert, I can’t confirm if he’s being honest or not, but I will say that the violence is largely worked into the film’s hyperreality well, embellishing the black humor and “anything goes” attitude.

While gangster films, and yakuza flicks in particular, are a dime a dozen, First Love stands out in that it largely forsakes those genre trappings in favor of making them dressing for Miike’s batshit “meet cute gone wrong” narrative.

Who knew beneath all the bludgeoning and eviscerations was the beating heart of a hopeless romantic?