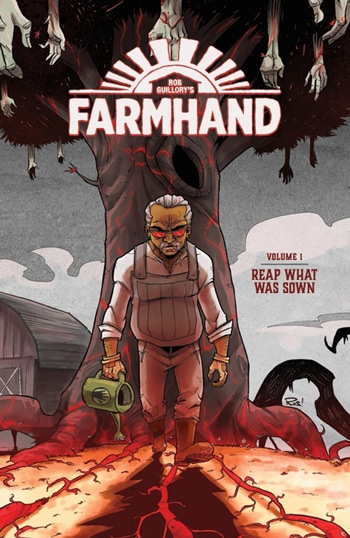 Written and Illustrated by Rob Guillory
Published by Image Comics

Come for the gory, stay for the story…

Any good piece of art is going to have different layers that eventually reveal themselves over time.

On the surface, that piece of art may be immediately appealing and lightweight but once you’ve moved beyond that first impression, your mind is open, and you begin the process of immersion. What was once comforting suddenly slips away and you begin to notice the different shades and shapes. And over the course of time, that piece of art becomes something entirely different and unique to you. We all process art – aural or visual – differently but as long as it has some kind of emotional effect on us, then it has done its job. We can live within that art or we can just enjoy it for what it is on the surface.

Which leads me to Farmhand…

Simply put, Image Comics’ Farmhand Vol. 1: Reap What Was Sown (which compiles the first five issues of the comic book series) presents a story much more layered than what is initially offered. Created, written and drawn by Eisner-winner Rob Guillory (Chew), colored by Taylor Wells, and lettered by Kody Chamberlain, Farmhand’s basic story is unique yet simple enough: farmer Jedidiah Jenkins has discovered a way to cultivate and grow human body parts on his farm, which are then used to help those that have lost a limb… or an eye… or a liver. Not unexpectedly, his crops of arms, eyes, and internal organs aren’t sitting well with the local  Freetown, Louisiana townsfolk. And when his estranged son Zeke/Ezekiel (a writer) moves back in to town with his young family in tow, things get tense and weird… not that things weren’t tense and weird already!

On the surface, Farmhand sounds like a basic horror story.

However, once you begin reading this collection, you’ll realize that things aren’t quite what they seem… even if you already know that this isn’t going to be a casual walk in the park! Visually, the juxtaposition between art and subject matter is immediately apparent. Guillory’s art blends childlike innocence with a surreal dark tone, exaggerating the characters’ physical features without removing their humanity. The coloring offers a perfect balance of comforting warmth and bone-chilling cold. Remember what I said earlier about different shades and shapes? Yeah, that.

While the visual tone might suggest a sense of frivolity, the subject matter takes Farmhand into many different territories without taking itself seriously. Apart from the obvious horror-based theme, you’ll also find a lot of humor and heart. The over-arching story is really about the fractured relationship between Jedediah and Zeke and the younger Jenkins’ attempt to reconcile with his father.

However, he’s also dealing with moving his supportive family back to a place he once belonged to but now feels separated from. Oh, and he’s not exactly excited about his father’s booming body-parts business. On top of all of that, the local townsfolk consider Jedediah to be the devil incarnate and want to put an end to his ‘evil’ ways at any cost. And did I mention that there are outside forces trying to figure out how Jedediah is successfully growing body parts so that they can steal his secret for nefarious reasons? Better yet, are his farm-fresh digits actually successful after all or do they have side effects? I won’t offer any spoilers here… I’ve already said too much.

There are many other lovable characters including Zeke’s sister Andrea and a cast of farmhands – literally and figuratively – antagonists, and those that will obviously play a bigger role in the future. Farmhand is not over-stuffed with characters, but it certainly isn’t lacking in that department either.

This is a book that works on so many levels. The over-arching story tackles family relationships, religion, science, loyalty, greed, deception, and many other subjects while also being highly entertaining and riveting. Some may still think of comic books as child’s play, but Farmhand works its magic – and horror – with a child-like sense of adventure coming from a very mature point of view.

To fully appreciate any piece of art, you must leave preconceived notions at the door and approach it with an open mind. That isn’t hard to do with Farmhand – you’ll find yourself under its spell in no time.