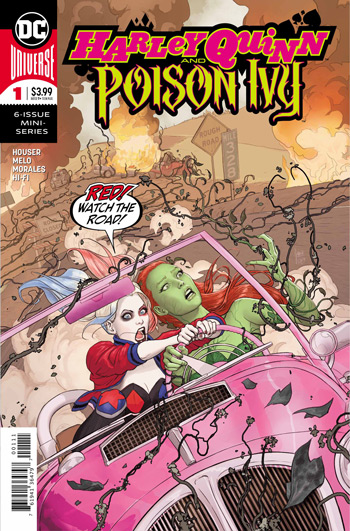 Harley and Poison Ivy have been BFFs for a number of years now. Jody Houser hops on with the squad train to give us Harley Quinn and Poison Ivy #1 of #6.

In the aftermath of Ivy’s death in Heroes in Crisis, Harley lends a green thumb in resurrecting Ivy in a very “Groot” fashion, from a flower pot. While I’m not crazy about the plant growing character trope blossoming, it does actually create a cool and new conflict for the center of Houser’s story.

Also taking a leaf out of Swamp Thing’s connection to The Green, and a little of Elastic-Girl’s conundrum, Ivy needs to control and prune herself to not so much look like an actual plant. At the beginning of the book, she looks more like a green stalk of wheat than she does Uma Thurman.

Pam and Harley have your typical best friend romp you might expect, until a clothes shopping trip turns Poison Ivy into a salad in the dressing room. Salad dressing?

Harley nurses her back to health with a mysterious box from ‘Year of the Villian’ mastermind Lex Luthor. So far, this is the best use of ol’ baldy sending packages and holograms of himself for this crossover. Houser took the concept and spun it into a cure to make Poison Ivy whole again, instead of granting superpowers or tech to the duo like he has been across the DCU.

With her abilities restored, she is able to grow some new clothes as well and Harley makes the argument that they should go clean with this new lease on life.

The major conflict in the issue comes from the appearance of the Floronic Man who detected a shift in The Green and is putting the duo’s newfound clean streak at bay, as he traps Ivy to persuade her to use this power for evil!

Will these two meet eye to eye? Will Harley be convinced to join this Year of The Villain nonsense while having a crisis of faith? The series is set to be six issues, and technically doesn’t have the banner across the top, but we’re feeling this is an offshoot of Bendis’ line wide event.

So far, with not much but setup in the first issue, I am along for the ride. It was definitely interesting to see how Poison Ivy’s power set can be altered and can be ‘regrown’. If that was the case before, I was unaware but it is pretty cool. Modern day Harley Quinn has done some growing up and is more of an anti-hero than a straight villain these days, and like Deadpool across the street has good opportunities to show her humor and break the fourth wall.

This series is off to a good start, even if I think there could be issues trimmed off of the mini-series format. Lately DC has been dragging these things along. I’d rather a tight four issues than a drawn out six.