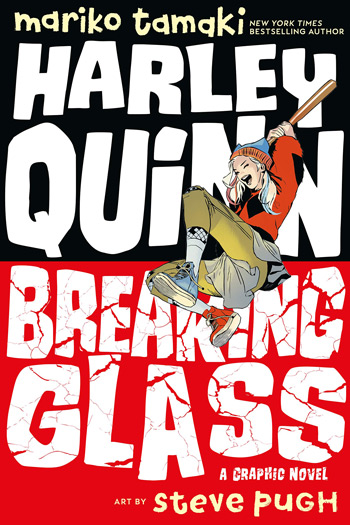 I’m normally not a big fan of the various and numerous comics books about Harley Quinn.

The character has always felt a little too “one note” for me. There have been some great stories with her in it, but usually the books just fall flat.

This book is the exception for me. With it’s strong creative team, this book makes Harley Quinn a character which I can finally relate to. This is pretty great and, to be totally honest, one of the best books of 2019.

It’s the world of Gotham from a young person’s perspective and it’s beautifully illustrated by Steve Pugh.

But are they trustworthy?

Mariko Tamaki really nails the tone perfectly of the writing and how the young people behave in the book. It’s sweet, accurate, and above all, honest.

Harleen gets to stay with Mama, who is a pretty famous drag queen in Gotham. Their interactions are spectacular and really elevate the entire story. We see Harleen going to school and the interactions there. We even see a discussion about politics and gentrification happening in these pages. Things just get more interesting from this point on.

Harleen becomes more and more interested in the world around her. Harleen is from one of the poorest neighborhoods in Gotham. When the gentrification starts to affect her neighborhood, and specifically the cabaret that Mama hosts, Harleen then has to make a decision: She can go about helping her friend Ivy who has a level headed way of fighting back. That would be the safe choice.

Then, there is the neighborhood punk named the Joker. He’s a guy causing a bunch of anarchy. He has a plan to fight back that isn’t exactly legal. Harleen must make a tough decision. It’s one that will affect the rest of her life.

That’s the most amazing part of the book. It shows the consequences of certain decisions young people make. It shows the ramifications of what people do and which paths we all have been down.

Tamaki has always been great. Here, she triumphs with a strong and insightful script. Likewise, Steve Pugh is doing the best work of his career. This is an amazing book, and it’s one that anybody can enjoy and digest easily.

It’ll also be a story that people will never forget.