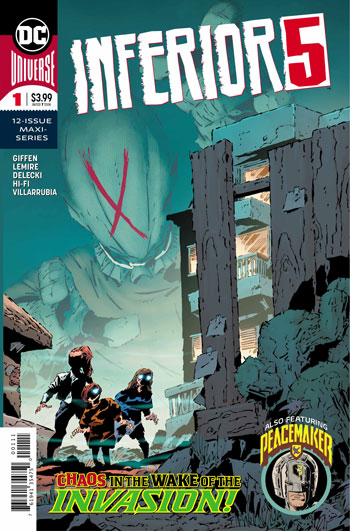 This was a weird, yet fun surprise.

I had all but forgotten about the Inferior Five characters. But I don’t blame myself as they are pretty damn forgettable. It’s a good thing then that this book has two top level creative people both writing and directing different stories here.

That makes all the difference as this ended up being a really strong and creative comic book.

The opening pages of the book have a girl running away in the middle of a desert like area. She doesn’t get very far because an alien basically stops her and seemingly kills her.

This is a hell of a setup and I was hooked right fro this point on!

From there, we are introduced to the denizens of Dangerfield, Arizona. There is a lot of strange happenings going on. There is even references to the Invasion! storyline from the 1980s which I am sure that most people just forgot about. Lemire and Giffen set up an intriguing mystery.

The only people who notice these  strange happenings seem to be five kids. This issue introduces them all and sets up the story. Then, by the end of the issue, everything is in place and ready to go! It has some great art on this chapter by Giffen as well and it reminds me of a time that has passed in comics.

The backup story is written and illustrated by Lemire. It’s a story about Peacemaker and his battle against these aliens. His quest at the end takes him in the direction of Dangerfield, Arizona! It’s a nicely done little story at the end that makes you want more immediately! This issue is a nice package overall and is very enjoyable. Well done.