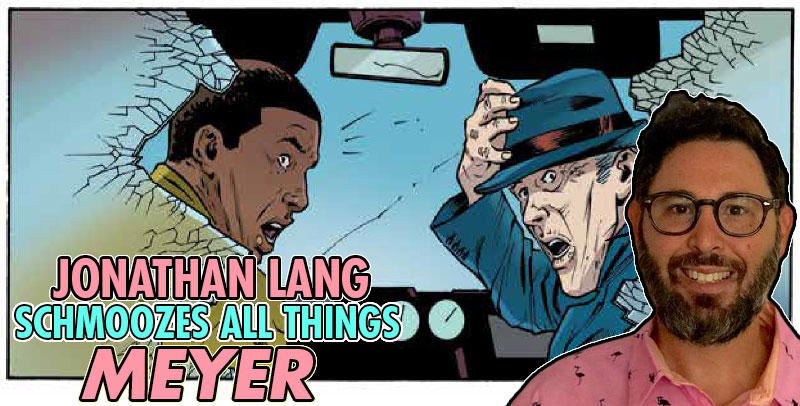 Meyer Lansky is dead … or at least that’s what he wants his enemies to believe. But the old man has one last job to pull off, and he can’t do it alone. Once he recruits an innocent bystander, their journey propels them headlong into an adventure filled with murder and malice, towards an ending neither could possibly have foreseen.

Lang took some time to discuss the book, it’s genesis and his love of 1980s Miami with Forces of Geek.

FOG!: How would you describe your book, Meyer?

JONATHAN LANG: Meyer is an “imaginary biography;” a real-life, inspired character, dropped into a gritty, Miami Noir, crime comic. I almost feel like it’s kind of a Bizarro Tintin comic. Where Tintin utilized a comic figure in real-world settings, I am using a real-life figure in a fictionalized backdrop. That backdrop, however, is deeply drawn from my childhood. 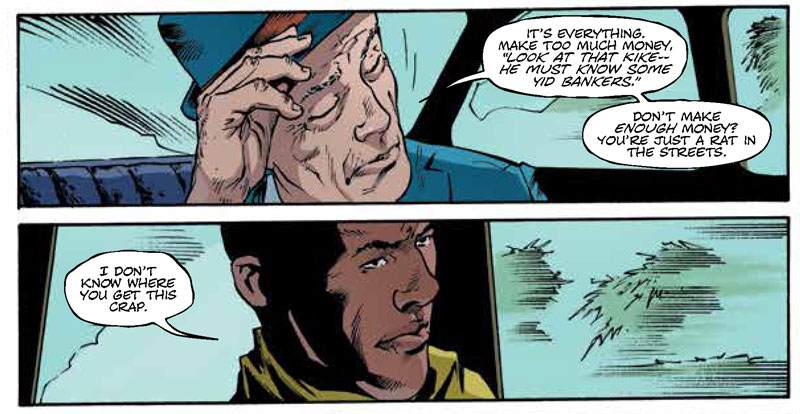 What was the genesis of the comic?

The comic came from several biographical tendrils that I finally found a way to fuse together. I had been searching for subject matter for a Florida Noir I could call my own, to stake my claim as Miami Noir being a real thing in other mediums besides fiction. I was flipping through a book I used in middle school about crime called Blood Letters and Bad Men.

In it, I saw a photo of Meyer Lansky, a figure I had always been interested in as my family talked about him through their reminiscing about Brooklyn in the 1940s. I had family working low-level jobs for the Lansky/Luciano mob then: running numbers, picking up packages, etc.

In the book, I found a picture of Meyer walking his dog, Bruiser, along Collins Avenue in Miami Beach. He looked so sharp, wearing a black suit and sunglasses looking over his shoulder, as the Feds pursued him. Where was he going? I didn’t know he was in Miami Beach, a place I knew well as my Bubbie and Zeida used to have an efficiency apartment there. I LOVED the Miami of the 1980s; it was my home. 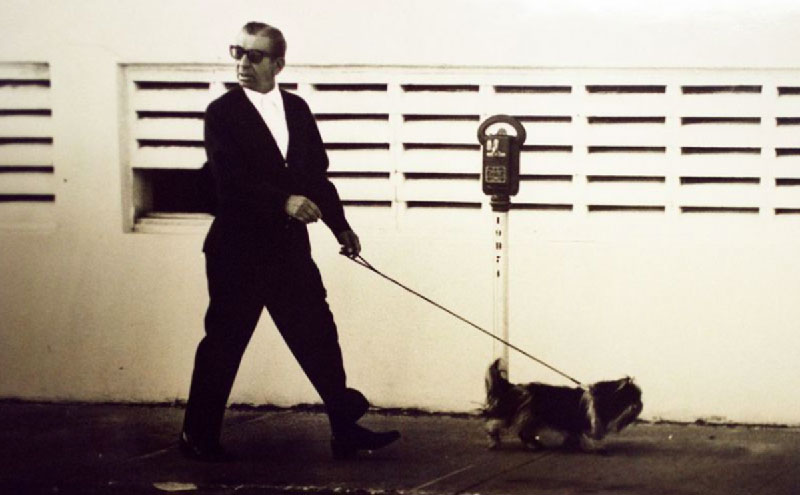 I also remembered my time working with an elderly companion in a nursing home while at Brandeis University. Somehow, these ideas connected. What if Meyer Lansky was hiding in a retirement home, and he was the elderly companion I was visiting? Lightning had struck. It only took 20 years to get this story published.

How did Andrea Mutti come aboard as the artist and what does he uniquely bring to the project?

Fabrice Sapolsky, the incredible editor of the book, connected Andrea and me.

Initially, I imagined the book being more “cartoonish.” However, Fabrice knew that the DNA of the book was pure pulp noir, and he teased that out through pairing us together.

Andrea brings many talents beyond being able to crush a page. He can turn two penciled pages in A DAY! He is a fantastic creative partner, encouraging me when needed. He is a wise visual storyteller, helping me arrive at visual solutions when pacing needed to be prodded along.

Finally, he brings atmosphere. The comedic tone of the book would not work unless Andrea was able to ground it in the tough-guy world. He would text things like, “we’re not making Looney Tunes.” And I love that; I love notes, I love when smart editors and artists tell me what is not hitting. It just makes the work better.

And Andrea did that. For that, I will always be grateful. 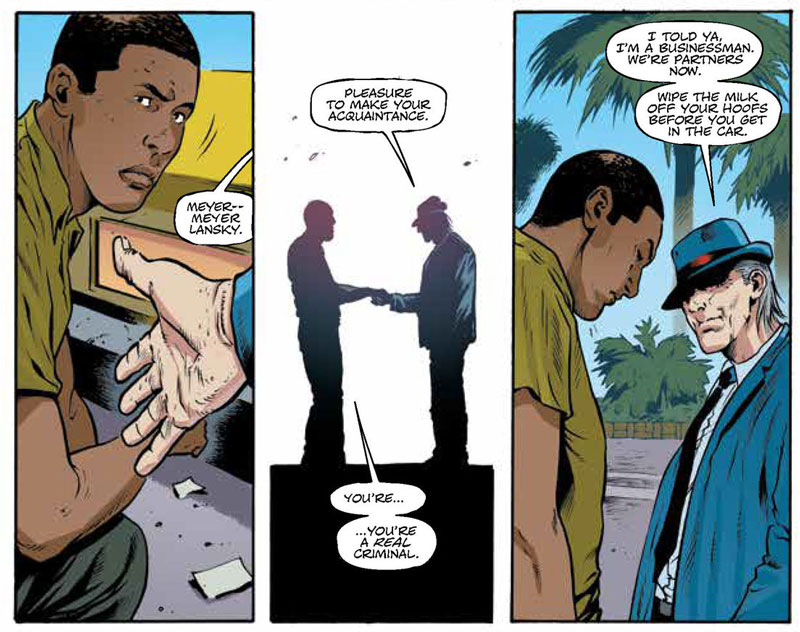 The book is a fictional narrative, but it’s protagonist is a real person.  Was there any particular reason why you chose Lansky as opposed to other real life mobsters such as Lucky Luciano, Bugsy Siegel, Frank Costello, or Arnold Rothstein?

Meyer, for me, was a more realistic figure than the others.

My father remembers seeing Meyer Lansky at the hospital he worked at in Miami in around 1982. He was stunned by the command he respected. My father is rarely impressed with people.

Also, Meyer is so mysterious. Other mobsters, sought out publicity. Bugsy and Lucky sought attention; they wanted to be publicly recognized. Meyer knew that there was a real power in invisibility. He was a puppet master. His biographies are often filled with contradictions and missing timelines. It just made narrative sense that of any mobster; he would be able to hide out. There is no way Bugsy could make it in a retirement home. He would have an affair with a nurse.

What kind of research did you do for this project and what influenced you the most?

I relied on a book called Meyer Lansky: Mogul to the Mob, that was filled with “interviews” that I used to draw personal accounts of Meyer’s life. He never gave interviews, and this book sold itself as having unprecedented access. I later found out from Meyer Lansky II (Meyer’s grandson) that Meyer hated that book and completely disavowed it. How could I know?

I am just starting to hear some true stories about Meyer from his grandson. He and his wife, Dani, have been so kind. I would love to collaborate with them on future projects.

Your comic writing crosses several genres.  Is there any dream project or collaborator that you’d want to work with?

Well, Andrea of course! I think it’s tough to talk about a dream collaborator. As I’ve learned, pen strokes alone do not make a collaboration. I have to really trust the person, and I care more about having coffee than looking at their pages. It’s just how I work. I have always wanted to collaborate with Jack Davis. Mad Magazine was my formative comic book. I guess artists that remind me of his work like Dan Ponosian and Bob Fingerman.

In terms of a dream project, I would love to write a Sandman (the Marvel villain) story that takes place in Miami. I know that is weird, but I do think something is compelling in his blue-collar background to explore in a modern Miami setting. And so much sand.

Do you have any upcoming projects in the works?

I have a couple of projects I would LOVE to get off the ground. One sci-fi with storyteller Matt Triano called Venture. I also have three projects (Ghost Bike, Reign Supreme, Six Months To Never) in the crime camp that need Andrea’s storytelling vision.

MUSIC – I really love the new Madlib/Freddy Gibbs album Bandana. Freddy is such a great storyteller, and Madlib has always been one of my top three producers. It simply hits so hard.

COMICS – Brubaker/Phillips’ Bad Weekend. It seems every at bat for them is a round-tripper. I also read it coming home on the train back to LA from SDCC this year, so the subject matter really resonated. There is nothing like a comic con to remind you of your fleeting relevance.

BOOK – Farooq Ahmed’s Kansastan is simply amazing. It is both of the moment and as timeless as scripture. It feels like a found scroll that bleeds authenticity.

TV – In terms of comic TV, I loved The Boys. I know this is sacrilege to say, especially in a comics interview, but I typically don’t connect emotionally with Superhero movies/TV. It’s too much spectacle for my brain to process. The political relevance of that show and the well-drawn characters really resonate. Non-superhero, for my money, Fleabag is the best show on TV. There are no supporting characters; everyone matters and is connected so well. The ability to shift tone, from hilarious to heartbreaking, within a scene and a line, I haven’t really seen anything like that on TV recently. Tone is an instrument, and I deeply admire those who have mastered striking the keys. 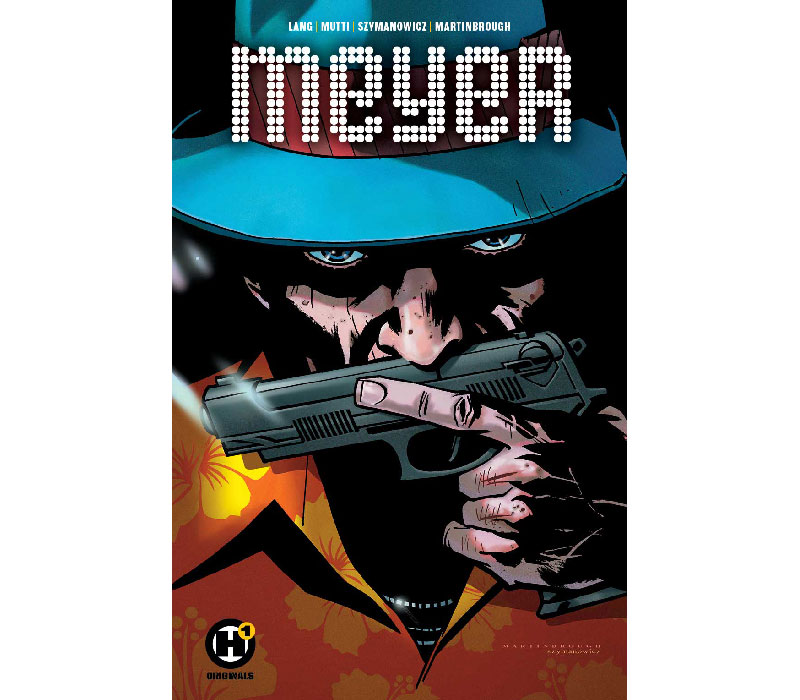 Meyer is available in stores on September 24th