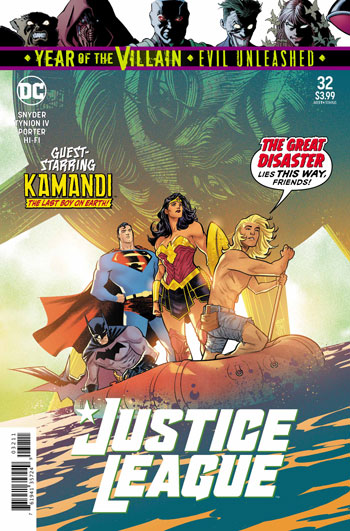 “Doom has all but won. But there’s still a chance to turn the tide. And to do that, the Justice League needs it’s Aquaman!”

Welcome to the third act of the Justice League’s long-awaited Justice/Doom War story arc – and the third issue to hit the shelves in less than a month.

One in the past. One in the future (or anyway a future). And one across the Universe at the edge of all things.

And let’s not forget that if even one of these missions fails, Starman has had a prophetic vision of Luthor, Perpetua, and Doom triumphant – in only three day’s time.

Got to get a move on then I guess.

Once again, it’s a set up that allows for a lot of spectacle. And while I’d love to see Jorge Jiminez follow up his excellent work on this run so far, at least they have Howard Porter and HiFi on hand to paint that spectacle in big colorful images. The Justice Society in Pearl Harbor, Justice League One Million under the thrall of Braniac, and Luthor putting down all comers in a space-operatic dog-fight with the Thanagarian Fleet as he and Perpetua move to collect the Anti-Monitor to fight by their side.

Which about sums things up. I have to say it’s satisfying to have gotten to a point in our saga where all of this actually makes sense, and hangs together, with the full cast of characters we were teased with waaay back in issue #1 coming together in a War to end all wars.

A war for the fate of the universe. The war to fight back Doom.

A war Luthor is winning.

Never mind that by the end of this issue the League has possession of each Totality fragment. Never mind that the Anti-Monitor has plans of his own, or that he has set a certain King of the Seven Seas to run a last minute and much-needed interference play that promises us an enjoyable new chapter in the history of Atlantis.

Is all of that really going to be enough to stop Luthor’s relentless march to restore Perpetua to her full power, or prevent him from turning our heroes into more Apex foot-soldiers for her army?

After all, the League is running on desperation and half-answers. While Luthor and his Legion have been given every advantage, and are being amped up to unguessed-at power levels under Perpetua’s divine grace. Just wait till you see what happens to Braniac.

It’s quite a set-up even, if it all feels a little rushed. And even though there are bound to be some twists and turns yet, things are rapidly developing to a conclusion that has only a slim chance of working out in the Justice League’s favor.

Makes you wonder what’s coming next.

Glad Ollie’s still got that box.