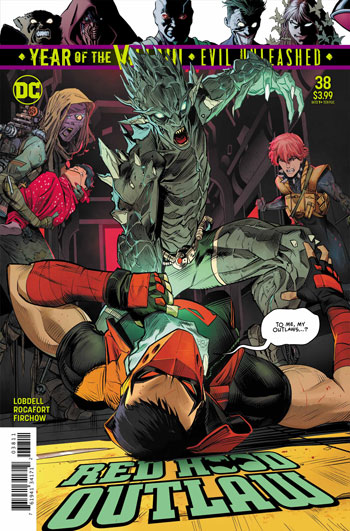 I love the direction that this title has taken!

Scott Lobdell is writing one of the most intriguing comic books on the stands. It just keeps getting better and better. I never know where the creative team is going with this book when I read it but I do know that I will always enjoy it.

The opening sequence has Faye Gunn having a weird encounter with Bizarro.

His eye appears at her window and it has to be seen to be believed.

We then get to see where Bizarro and Artemis have been. They had a great appearance in this year’s annual and this picks up right up from there. It is very comforting in a way to see them here again.

From there, we get to see the Red Hood gathered with all the costumed characters that he has assembled. He is trying to get these characters to safety. But he may find it to be a harder time than he originally anticipated. Lex Luthor has powered up an assassin to hunt the Red Hood and there is a lot of story threads suddenly in play!

This leads into a spectacular action sequence. The artwork here is excellent and really tells the story well. Kenneth Rocafort is one of the most underrated comic book artists out there. It is simply amazing what he can accomplish on a comic book page in general.

Eventually  the action actually slows down. There are a few scenes of character building. Then, it all ends on one of the most bizarre cliffhangers that I have ever seen. I do wonder how they are going to make it work.

If anyone can make it work though, it will definitely be this creative team. They work excellently together. This is another fine issue in a strong comic. I have no idea where we will end up but i do know that it will be smart and that always very fearless.