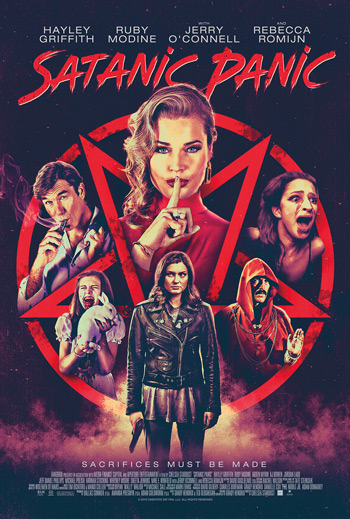 After an underwhelming opening, Satanic Panic introduces us to Sam (Hayley Griffith) a pizza delivery girl who winds up having to deliver an order to the wealthy neighborhood in town.

She delivers said pizzas to a creepy dude who stiffs her on a tip for a $100 tab. Incensed, she ends up breaking and entering to collect the tip she needs and feels she’s entitled to, only to interrupt a satanic ritual.

The rich, satanic jerks are furious until they discover that Sam is a virgin – see, they need a virgin for their ritual, since their previous virgin is no longer available.

This one’s a bit of a bummer. Shot and directed like a light comedy, with little aptitude for horror, the result is a misfired yukfest with mild horrific elements yet plentiful gore and violence, and precious few laughs.

Griffith is okay, but most of the rest of the cast flails, with Romijn in particular struggling to find a consistent tone (and I’m a big Femme Fatale fan)

Tone is a huge issue with the film in general, as it veers from gore humor to gross-out humor (there is WAY too much vomiting in this movie, and funny it ain’t) to attempted suspense (one or two sequences actually achieve this)

Late in the game, the film seems to want us to care about the caricatures they’ve been skewering. It doesn’t work, and it’s a tad embarrassing, frankly

The biggest problem here is that Panic tries way, way too hard to be “outrageous”, to the point that it comes across as rather square

The humor and gore are forced, the kills at times elaborate but never imaginative or effective, and the comic timing slack

On the plus side, the score is pretty good

But it’s disappointing that the film doesn’t pay homage to or explore its title. I assumed that it would be a riff on the titular hand-wringing of suburbia back in the day that tattoo-bearing, heavy-metal-listening teens were devil worshipers plotting the murders of innocent folk as sacrifices to the dark lord

Nope. It’s just a title, referencing a recognizable phrase in the horror community that refers to the film peripherally – and lazily

Satanic Panic is now playing in theaters, On Demand, and via Digital HD.