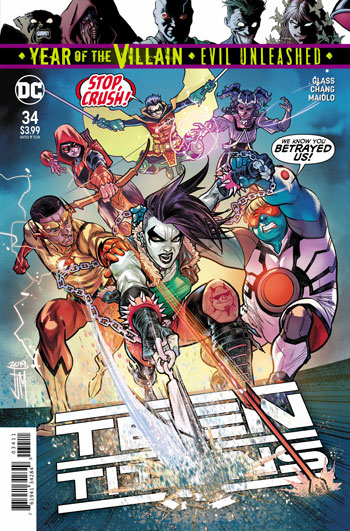 It had to happen eventually!

And this month it finally does. The traitor in the midst of the new Teen Titans stands revealed.

Frankly, I’m amazed that author Adam Glass has managed to spin it out this long. But between Red Arrow killing Deathstroke, and a certain someone pointing Lobo at the team, there’s been plenty to distract Robin from determining just who it was that freed the prisoners from his secret prison.

And now it may be too late. Because whoever it is that’s been pulling all the strings, has launched their final endgame – by stealing Djinn’s ring. The one that gives its wearer absolute power over her.

Which, of course, is bad. Very, very bad.

Robin’s response is to put Mercy Hall on lockdown and do his best Columbo routine – confronting each of his teammates in turn, to find out which one has betrayed them.

But who can it be?

Is it Crush? She can say all she wants that she’d never hurt Djinn. But there’s no denying how much more erratic and violent she’s been recently. Who knows what brutal motivations may be lurking behind those red, red eyes?

And Roundhouse? We still don’t know very much about Billy Wu. Or his sister. But we do know that it’s a story defined by tragedy. And no matter how dim and foolish he may appear to the rest of the team, there’s no denying that Billy is very, very smart… with a variety of far-ranging and unusual interests..

There’s Emiko, Red Arrow. No longer on the team – after killing the one man who could identify the traitor. A woman of secrets, her own brutal code of justice, and mad ninja stealth skills. Trained to turn anything in her environment into a weapon. Trained to kill.

Kid Flash has objected to Robin’s dungeon since he first discovered it. Supposedly. But he’s been compromised once before by Deathstroke, his own father is a criminal, and his morals apparently remain shaky enough that he’s stood by while Robin and Djinn’s rehabilitation program continue to strip the team’s prisoners of their own free will.

Come to that, Djinn’s own involvement with that initiative marks a dark shift for the 4,000 year-old, emancipated teenage genie. Seems strange that she’d so willingly strip any other being of their right to choose. And yet here she is, doing just that. Makes it hard to rule out the possibility of deceit, however aggrieved she may appear to be at the loss of her ring.

Not that she’s making any secret about her own opinion that Robin, too, has demonstrated a definite appetite for lies and manipulation. With possible motivations of his own for stealing Djinn’s ring.

In other words, it’s a mess in Mercy Hall, as all of the team’s on-edge anger, distrust and sense of betrayal finally comes boiling to the surface.

Which is exactly what our antagonist wants. A team, separate and divided. Making them easier targets, to pick off, one by one.

All the way up to the last minute, Adam Glass keeps us guessing who the traitoring the Titans is. And series artist Bernard Chang keeps pace, with a series of character sketches that suggest dark potentials in all of our young heroes.

All resolving to a final one-page frame of one, revealed to us finally, in their full malevolence.

It’s a shocking scene, as it’s meant to be. Shocking that is, unless perhaps you’re a movie buff, as Mr. Glass himself clearly is.

The signs of this have been there from the very beginning really, but if you don’t know what I’m talking about, I won’t ruin it for you. All I’ll say is that Kevin Spacey would be very proud. And that method acting can get you an awfully long way…

Because at this point we all know that Adam Glass likes his twists. And while our final page cliffhanger may indeed end up being exactly what it looks like, there’s at least one other explanation that may yet change the game entirely.

Hopefully before anyone else gets killed.