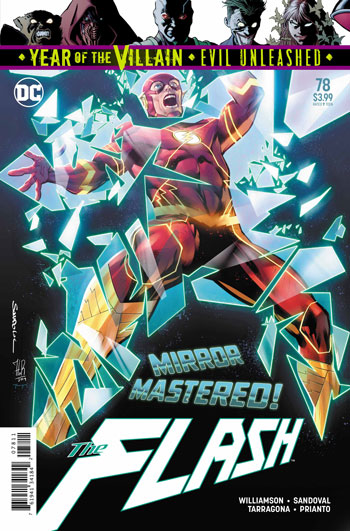 The story in this book has been just incredible. I have also been enjoying the artwork of Rafa Sandoval on this as well. Together, they make for a nice creative team on this book. I can’t recall the last time I was this excited about a comic book featuring The Flash!

The issue starts off with Psych going crazy and letting her powers loose! The Black Flash seems to be the one responsible however. That son of a gun is really wrecking havoc on the life of The Flash and everyone that is surrounding him. Barry tried to get a handle on the scene but he doesn’t seem to be having much luck.

Can he turn the tide or is everything going to go to hell?

Well, Barry stops Psych and gets the situation under control. This scene resolves itself. We then cut over to a few members of the rogues gallery paying Mirror Master a house visit. Things get tense quick and it’s a great scene that’s is sure to have ramifications in future issues.

There is a quiet scene that follows that lets the characters breathe a bit. It also allows the audience to catch up to the plot a bit. It isn’t long before the Black Flash resurfaces and Barry is chasing him again. The whole thing leads to one hell of a cliffhanger.

The last page is a breathtaking image that makes you want the next issue in your hands as soon as humanly possible. It’s awesome.

Speaking of awesome, the art by Sandoval really makes this book even better than it already is. The graphics are just awesome in this issue and I hope that he remains on this book for some time to come. He’s doing the best work of his career. It’s seriously that good.

Williamson is a great writer. He knows how to make an exciting comic book that also goes a bit deeper. My favorite kind of writer. I’m excited to see what’s next. It’s been great.