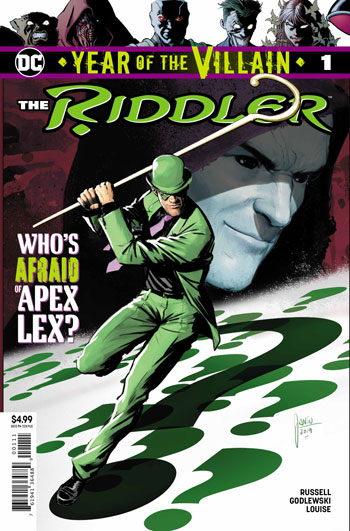 This was an incredible surprise. Mark Russell has an excellent take on this character. It’s a perfect match up between writer and character here and I don’t know why nobody had thought to do it before.

I love the way The Riddler is handled here and hopefully Russell gets more time with him in the future.

The issue starts off at a place called “Scarab’s.” It’s owned by the villainous King Tut. The Riddler and King Tut are having a discussion.

They are talking about the various fights that they have had with Batman over the years. It’s completely hilarious and strangely sad as they relay these stories.

Then, the story takes a kind of dark turn.

The Riddler tells Tut that he has received an offer from Lex Luthor. Tut tells the Riddler that he has not received one from Luthor but he he thinks he knows why. We then get to see the scene where Lex gives the offer. And it’s funny for sure. But it’s also layered width a sense of dread and malice.

The rest of the issue is pretty awesome. The story goes in a direction that I did not expect but don’t want to give away. Suffice to say though, the Riddler and King Tut have to team up with each other. And it’s completely excellent.  This leads to some surprising bits and moments.

It’s very funny in an honest way. My favorite thing in the entire issue is when we get to see where King Tut lives. I laughed out loud at that one. The whole thing leads to a nice twist at the end and I was thrilled by the wrap up.

Russell writes another excellent script here. He does a great job keeping things moving and keeping things interesting. The art by Godlewski is fantastic too. I love that this exists. I’d also like more like this to come along. It’s a nice fall surprise.