Recently a friend of mine and I re-watched the original Ghostbusters film together. He wanted to show it to his son and it was fun to revisit a movie from our youth. At one point during the film there was a prominent glimpse of the Twin Towers that took us both by surprise. Our shifting mood did not go unnoticed by my friend’s son who asked us what was up. While I let my friend handle the explanations, it occurred to me how much all NY based films made prior to the tragic events of September 11th 2001 now carry a different meaning. Even in a fun, seemingly harmless film like Ghostbusters, their image can evoke sadness. Obviously no filmmaker could have ever predicted this.

The World Trade Center began construction in 1966 and was completed in 1973. During its seven-year construction it was often featured in skyline shots to show an ever-changing New York. Friedkin’s French Connection shows it ominously incomplete in the background illustrating the noisy nature of New York. Two years later Lumet’s Serpico, another gritty cop movie, shows the completed Towers as shining pillars of a new New York.

Before the construction of the World Trade Center, the Empire State Building was world renown as THE building of the city. After all, King Kong climbed it in 1933, showing both how impressive Kong and the Empire State building truly were. Of course Kong would climb the highest building in New York, he’s King Kong! So it only went to follow the remake of King Kong in 1976 would have Kong climb the newly completed biggest buildings in the world instead. 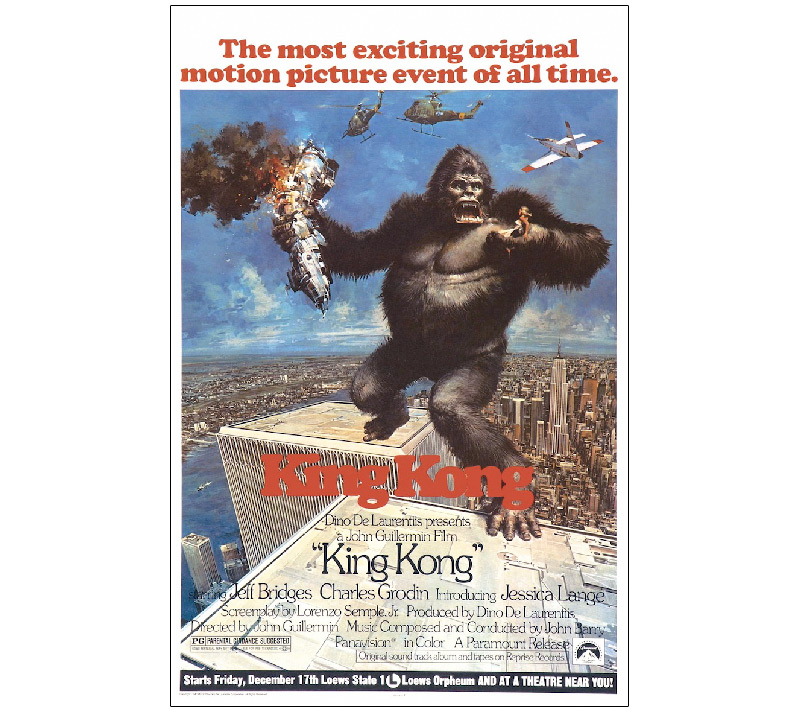 And the challenges the highest building didn’t stop with giant apes. Philippe Petit, a tightrope performance artist, illegally waked between the Twin Towers in 1974. His daring adventure can be seen in both the amazing documentary Man on Wire, 2008 and later in Robert Zemeckis’ dramatic film The Walk, 2015.

As soon as the Twin Towers usurped the Empire State Building as the highest most powerful point in all of New York filmmakers began using them as a plot point.

Three Days of The Condor, 1975, has some great images of the inside of the lobby, Superman, 1978, showed their beautiful profile at night, and Home Alone 2, Lost in New York, 1992, shows the buildings as most people saw them from the ground up. Coincidentally, the promotional poster for Home Alone 2, Lost in New York, shows all three major New York City landmarks including: the Empire State building, Twin Towers, and the Statue of Liberty making the double face slap of Macaulay Culkin’s ever lost character, Kevin. 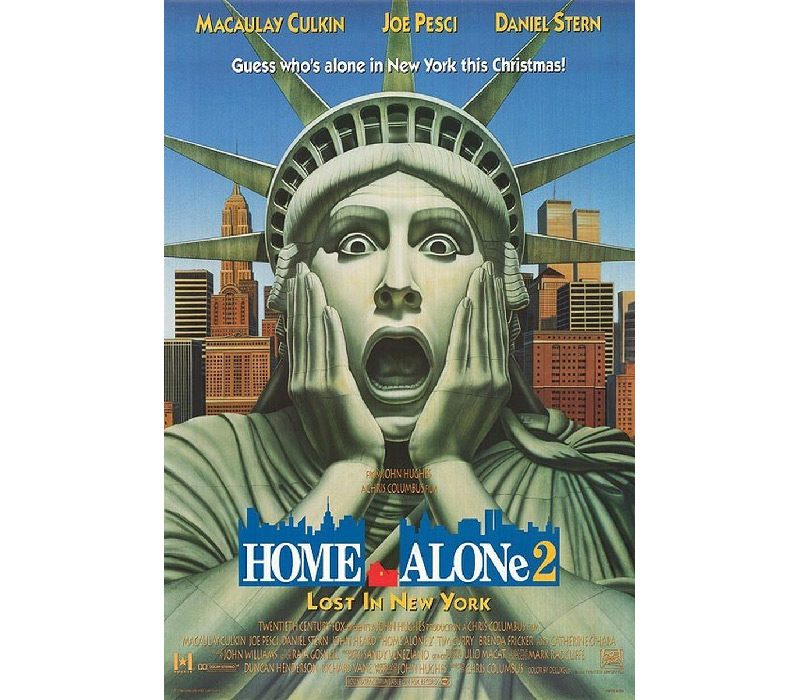 Besides being a melancholy reminder of that terrible September day, the images of the Towers also instantly date a film. While movies set in “present day 1973 through 2001” aren’t affected, the movies set in “possible futures” certainly were. No better example of this was Stephen Spielberg’s A.I. A.I., or Artificial Intelligence, follows the journey of a boy robot played by Haley Joel Osmett in the future. The future that Spielberg devised showed Manhattan more than half under water due to rising sea levels. The preview for the film follows a space ship as it flies above the water past the hand of the statue of liberty and clearly shows the Towers poking out from the waves in the distance. Of course, we now know there would be no more Towers in future New York landscapes. Although present in the films initial theatrical run the images of the Towers were subsequently removed from the DVD release.

Other Sci-Fi dystopia views of future New York showed The Towers as well. The cult classic The Ultimate Warrior with Max Von Sydow and Yul Brenner was made in 1975 but was set in 2012. It showed a future Manhattan over run by gangs with the Twin Towers as a backdrop throughout.

No one could possibly blame the filmmakers for thinking these buildings wouldn’t remain permanent fixtures of the New York landscape, in fact, they were the safest possible bets in future storytelling.

Unlike A.I., other films slated to come out that same year made desperate moves to remove the Towers from their film. The biggest example of this was Sam Raimi’s highly anticipated big budget Spider-Man. Millions were spent digitally removing the images of the Towers that were throughout the film, as well as taking the image of them out of the reflection in Spider-Man’s mask on the original poster. The teaser trailer for the movie, which can still be found on YouTube, heavily featured the Twin Towers, as they were the posts for the huge spider web the fleeing villains were caught in.

Comedies set in New York were also affected. The last thing any filmmaker wanted was people to be sad in a comedy. Adam Sandler’s Mr. Deeds original promotional poster, showed a sleeping Sandler curled up in a huge hammock strung between the two Towers. While this poster ended up being replaced you can still find it on eBay. Even the extremely popular TV show The Sopranos removed the image of the Towers that appeared in Tony’s driver side mirror in the shows iconic opening credits.

Other films caught up in the immediate aftermath of 9/11 were those that sadly premiered the following week. Mariah Carey’s ill-fated film Glitter was a double whammy of sorts. Besides being what most critics described as a terrible film with a horribly unfortunate release date, it happened to feature the World Trade Center no less than three times, which only served to make people feel even worse about paying to watch Glitter.

Another film, who’s chances were squashed after 9/11 is not a bad film at all. Gregor Jordan’s underrated Buffalo Soldiers, starring soon to be Joker Joaquin Phoenix, is a rarely seen gem about the mischief American soldiers get into when there is no war to fight. Having premiered two days before September 11th at the Toronto film Festival audiences weren’t ready for anything that depicted soldiers in a bad light, especially since they were now obviously heading into war.

A medium greatly affected, but rarely discussed, is comic books. New York City is the stomping grounds for many super heroes, including Daredevil and Spider-Man. New York also serves as the model for the fictitious cities of Gotham and Metropolis. Ever since the Towers were built, comic book artists used them in countless panels for good reason. Why not use the tallest buildings in the city to show how high a hero can go?

Some of the best covers of comics that were illustrated prior to September 11th take on a new meaning now. Wonder Woman issue 225, Justice League America issue 56, and my personal favorite, Elektra issue 9, all show the Twin Towers in their glory. 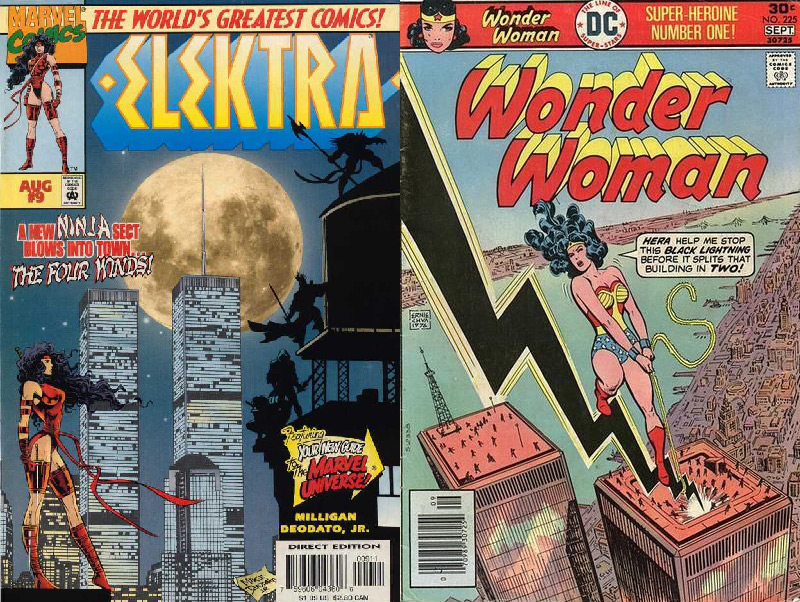 Pepe Moreno’s 1980’s graphic novel Rebel showed a future New York overrun with gangs. These gangs manage to successfully blow up one of the Twin Towers as shown on the cover of the reissue.

But those were all written prior to September 11, 2001. Issue 596 of The Adventures of Superman, actually hit the stands on September 11th and featured similar buildings in Metropolis being destroyed. DC immediately offered readers refunds if they found the issue upsetting. It remains one of the only times in the history of comics that ever occurred.

I feel fortunate to have been inside both Towers of the World Trade Center when I was younger, and I still love seeing their images. The lasting images shown on film, TV, and comic books, while having new meaning to me, are even more deeply appreciated.

Fred Shahadi is a writer and novelist living in Los Angeles California.