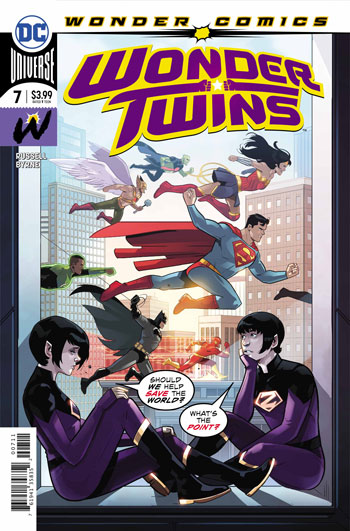 It’s always got an amazingly funny script by Mark Russell. He’s one of the best writers in modern comics. Right alongside that is the incredible artwork by Stephen Byrne. They really do come together to make one of the best new comic books in recent memory. It’s always at the top of my reading list every time it comes out!

The issue opens with Zan being heralded by everyone as a hero. Everyone is happy because he has taken down the Scrambler. This makes Zan extremely happy because he becomes popular because of it. Hell, he even finally gets his varsity letter in hockey!

Can things get any better for good old Zan?

While Zan is out soaking it up and giving fist bumps to the jocks, Jayna is doing the complete opposite of him. She’s being more and more reclusive. It isn’t long though before the two of them get into some crazy hijinks though!

This starts when the Wonder Twins act as tour guides at the Hall of Justice. While they are giving a tour, the Justice League is having a crises. It’s fantastic. Russell shows the anxiety of the League perfectly. It’s funny as hell.

The Wonder Twins then have to spring into action eventually. It’s a great lead up to that moment where they head into action. And so we are off, into a brand new storyline (which also picks up where the last one left off and takes some of the threads along). It’s great.

Russell is a fantastic writer. You can’t say enough about him. The art by Byrne is great. He’s one the best new artists of the last few years. I’m glad this book was extended to twelve issues. It should be an ongoing of course, but I will take what I can get.  Especially when the creative team is this brilliant.