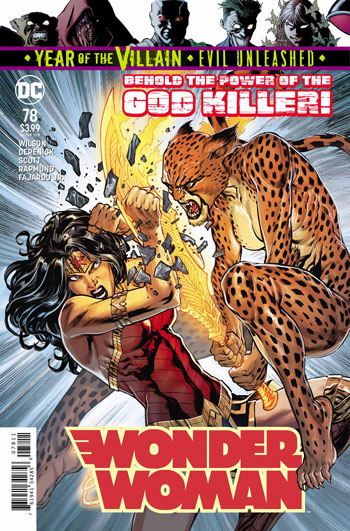 The latest issue of Wonder Woman continues the story of Diana’s world after Aphrodite was murdered by Cheetah last issue. The consequences are affecting Steve; Aphrodite’s now motherless demigod spawn, Atlantiades; and Diana being stripped of her shield and bracelets by Cheetah.

What first strikes me a great in this issue with real consequences is Derenick’s art.

These Wonder Woman stories are the most appealing to me with classic comic book art style with dynamism and real emotional characterizations of our favorites. There is a lot going on in the plot, but easy enough to follow as you look at the expressionistic faces of all of our main characters throughout the book.

I’d rank Derenick’s work here as high as Bagley for this kind of realistic portrayal of everyone. It almost seems as if he is in the Bagley ‘School of Drawing’. That’s meant as a compliment. Great storytelling here on the page.

I’m not nearly done heaping praise on Wilson, and will repeat myself (sorry, this is the nature of these kinds of reviews, I am the one writing issue after issue of reviews for this story)! Wilson’s strength really lies in leaving a last page cliffhanger, she’s making us care about the characters, and is also dancing around the Greco-Roman mythology in a fun way. She even introduces one of the arc’s main players in Atlantiades, a new-to-us beautiful gender non-conforming demigod creature with powers of their mother passed down.

Steve and Diana struggle with mostly trying to keep it together, they have had a lot of time apart lately, and their reunion is tainted by the Aphrodite murder. The name of this arc is Loveless (this issue part 2) and slowly…we start to realize that Love is Dead. This is very smart and subtle storytelling not approached with such skill since the days of Sandman.

For example, Death in that story is a person but is also the concept of Death. If you open your mind to match Wilson’s (tough to do, as hard as it is to match wits with Gaiman!) you see a world constructed without an essential base feeling…Love. Imagine a world without the feeling, the warmth, the compassion that goes with Big L Love.

Aphrodite is gone…so Love is Gone. You don’t realize this at first, but Atlantiades does, and soon Steve and Diana do.

And so does Etta! Etta struggles to help Diana in a world without love, so they turn to Veronica Cale for help in a desperate move.

I can say, this is an exciting overall volume and I am begging for Wilson to be more important to DC besides this one book. Give her more to do, please! DC’s vision should be more than Bendis’ vision, and Wilson is dealing with the Year of the Villain with style and grace. Perhaps she can construct the next big crossover!