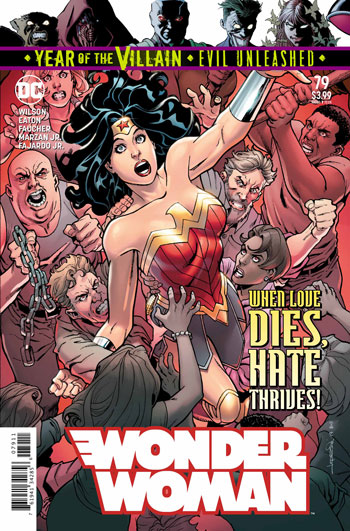 The most frustrating part of double shipping is we have gone beyond one artist per book for scheduling.

Wonder Woman #79 continues along this path, and so far the wheels are attached to the wagon, but top tier books always have the priority for top tier artists, but at what cost?

Art in this issue is fine, good, OK, but I was praising Tom Denerick a fortnight ago but now I’ve got a list of four names on the cover and I don’t which way is up.

Can’t we, I dunno, just ship once a month, where the writer and artist get into a Miller/Mazzucelli groove? Fraction and Aja?, Bendis/Pichelli, O’Neal/Adams?

Are these creative team ups being sacrificed merely for profit? What about demand?

Sorry Wonder Woman fans, one book a month is plenty.

Let me not take away or blame issue #79’s Scot Eaton who I have just learned will be taking over from Jesus Merino as ‘regular’ artist on the book. My screed not withstanding, I also learned that Steve Orlando will be taking over writing in issue #82. So much for an epic Thor-like run for Wilson! It was fun while it lasted! Eaton is great, welcome aboard. Fun fight scenes and draws all of the characters on brand for the series and, for better or worse, in line with current DC house style.

This is ‘Loveless, Part 3′, a status quo where Love and the Goddess of Love, Aphrodite has been murdered by Wonder Woman rogue Cheetah under DC’s Year of the Villain banner.

Aphrodite’s legacy lies with Atlantiades who seeks to avenge their mother’s death and people are falling out of love and feeling warm to each other across the multiverse. Atlantiades’ home away from Mt. Olympus is a nice little town called “Summergrove, CT”, and when Maggie drops in with her special sword, she only finds Atlantiades!  Maggie takes the encouraging friend role and urges revenge before the lack of love takes hold.

A weakened Wonder Woman defeats Cheetah and (please forgive me) sends her back to Luthor with her tail between her legs and her almighty god killing sword.

At home, Diana is facing another big threat. Steve Trevor has been sidelined for too long. She saved Themyscira but her literal home among the world of men has been abandoned, a goddess was murdered in her house and Steve is fed up.

Wonder Woman can’t seem to catch a break from either the mortal or immortal side of the aisle. Will Atlantiades be able, as a mere Demigod, to restore the concept of love to the universe? We’ll have to tune in next time to find out, but at the end of this issue, you can tell Diana just wants a long soak!

I’m here next time as well, no matter who is drawing the issue. I’m caught up in the feels with the soap opera aspect of the book and want to see if they explore the draining love out of every other relationship in the book. No one seems to notice love is gone until that fact is pointed out to them.