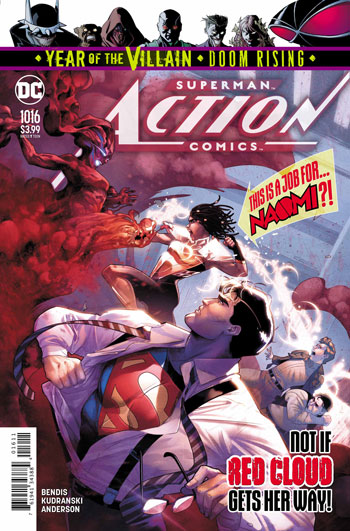 This title has really hid the skids in the last few issues.

Having Naomi in this title feels like a cheap ploy on behalf on Bendis. The whole title kind of feels out whack as a result.

When Bendis first took over this title there was suspense and intrigue. Now that is all gone at the expense of “getting a new character in Action Comics!”

The beginning of the book has Lois Lane doing some reporting. People are telling her that Superman was in trouble. It was looking really bad for Superman.  He was taking a huge and brutal beat down. Then, he is saved! Who or what saved him? Well, that is what the rest of this issue is all about.

We cut over to the Hall Of Justice and we get a scene between Batman and Naomi. I have to say, this was one of the most annoying scenes that I have ever read. Batman basically manipulates Naomi as he does everyone and it made me wretch just a little.

The whole thing leads to Naomi helping out. It also leads Superman and Batman to Naomi’s parents by the end of the issue which was again written in a completely obvious way.  It actually feels so strange and so incredibly forced that I just wanted the issue to be over.

By the last cliffhanger moment, I didn’t care one bit about what happened here.  And that is a damn shame. Bendis can write better than this. This was just not well handled at all.

The bright spot is the artwork by Szymon Kudranski. Kudranski is turning out some of the best artwork that this title has seen in quite some time. If only the story were stronger, this would be the perfect book.