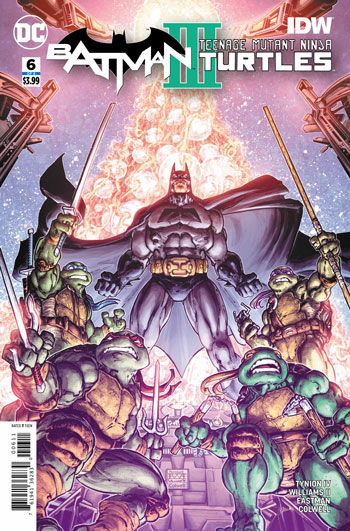 Ahh, the sweet relief of a series ending! I’ve gone from enthusiast to impatient with this series, but now I’ve come full circle back to loving Batman/TMNT III again.

This issue starts off mid brawl, with Joker, Shredder, Harley Quinn and Casey Jones in a melee with betrayed Foot Clan soldiers.

The title page splash has two Batman, the Bat Family and two sets of Turtles taking on The Foot. Krang’s plan to merge the multiverse is in full swing, and our heroes must stop his evil plan.

Not to be sidelined, Alfred, April and Splinter separate as Alfred heads back to the Batcave.

This issue we get more interaction between the black and white turtles and the modern day turtles, with mutual respect for one another.

Conceptually I really dig the multiple versions, I do like the rounded, painterly and cartoony style that Freddie Williams II employed with this book, but my criticism of coloring the older generation of turtles as black and white figures with gray wash still doesn’t sit well with me on the page. This is obviously a conscious decision artistically or editorially, but at risk of repeating myself the combination is a bit off-putting.

My preference would be to bring the Eastman Turtles to present day with consistent coloring. You could still have the same effect, just have the original turtles in somber and muted tones, or use a Zip-A-Tone (look it up, kids!) effect to distinguish the two teams. This could be all my personal taste and I think that Williams did a great job of capturing Eastman/Laird style with his drawing! I don’t wish to insult the artists or the team because their way does “make sense” I’m just not sure I would have made the same decisions.

The black and white art looks out of place in 2019 when mixed with color. Heck, maybe I’m just mad because I can’t tell the older turtles apart because of the color of their masks! Which one has the sai? He’s my favorite.

Moving on, using Jack Kirby’s Boom Tubes and other tried and true multiverse tropes sews the Earths back to where they should be, with the requisite goodbyes, backslapping and congrats.  If only there were a way to celebrate and feed a hungry family of seven on the cheap back at the Batcave and Alfred doesn’t have to cook. What way could they celebrate?

I think overall this escapade, a third in the series for some reason, was one issue too long in the tooth, I did enjoy it. Let’s give it the old Ed McMahon 4.25 stars and call it a day. I’m sorry I was so mean to you, you bizarre little inter-company crossover! Thanks for turning it around at the last mile!