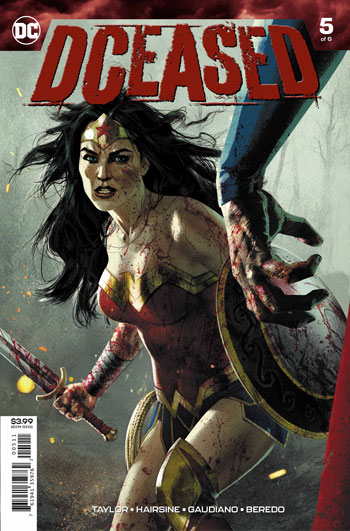 This fantastic book takes place in an alternative version of the DC Universe. The people in this universe are fighting against a zombie-like plague. It has wrecked havoc in everyone’s lives. This book is unflinching and doesn’t hold back in any regard and I completely love that.

The opening of this book has Superman and Wonder Woman flying above Metropolis. The city has been completely destroyed and millions of people have died. The devastation is horrifyingly captured perfectly by the art of Trevor Hairsine. It has a weight to it that cannot be ignored. I couldn’t look away from it.

There is a reference to only cockroaches surviving this destruction.

And that is when Lex Luthor appears. This is a brutal moment. At first, it seems like he and Superman are going to fight. That is when Luthor looks at Superman and sadly says “Look at what happened to our city.” It is a poignant moment between the two characters that really hits the reader square in the chest.

At this point, the remaining heroes come together to try to put together a strategy. Damian Wayne (now Batman) leads a team to go talk to Poison Ivy. The heroes need her if they have any chance of surviving. They come to terms with Ivy and that is when you see that the heroes are trying to build an army.

It doesn’t go too well. Lex Luthor causes some problems and it leads to a fight. Things start unraveling. Luthor is killed by the Flash. The only person who can stop him now is Superman. I won’t spoil what happens but I will say that the last few pages are emotional, shocking, and just utterly amazing.

The last panel hits the hardest. There is a big change in the story dynamic at the end. The creative team just nails it perfectly. I loved this book and all of the twists and turns it took. It is brilliantly done. There is nothing more to say than that.