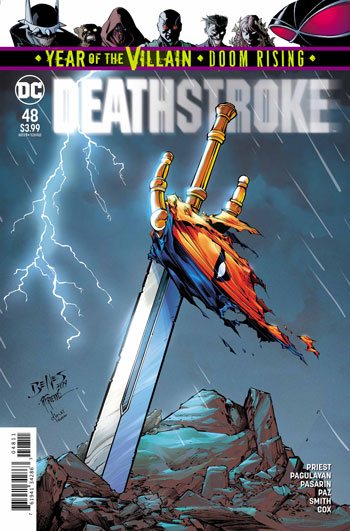 This has been a great run of comics.

Christopher Priest has done an excellent job of really keeping this book exciting and smart. It moves at a great pace each and every issue, and there is nothing else like it.

I really love what has been created here. Priest is one of my favorite writers and definitely the best writer that this character has ever had!

Slade Wilson meets up with the Legion of Doom and is mad that his son has received the offer for power. It’s a humorously dark scene. It also leads into a pretty intense and crazy issue for Slade. He takes a physical and emotional beating in this issue.

We learn how Slade Wilson was brought back from death’s door. It has to do with Raptor and how he infected Slade’s body. It is pretty well thought out and very funny as well. I won’t spoil it, but the dialogue about “leprosy” possibly saving Slade’s life was a scream.

We get a few flashbacks that show how Slade came back to life. We see how he feels about being rejected by the super-villain community at large. Slade spends a lot of this issue regrouping. It is interesting and never boring thanks to the great work done on the character by Priest.

Priest focuses the entire issue on Slade wanting the power he deserves. By the end of the issue, he finds Jericho’s mother and demands that she help summon him. It is pretty damn cool and it ends on a high note for sure.

Like I said at the beginning of this review, I love this run of comics. It is going to be an absolute classic when all is said and done. Kudos to Priest and the artists and creators that have worked on this title. It’s been truly great.