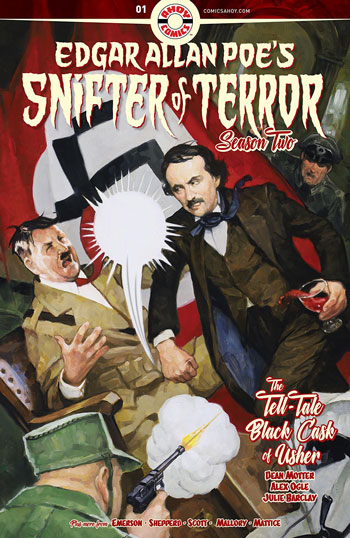 The first series of this title had some pretty amazing stories. They were funny and incredibly inventive.

I was interested to see where they might take us this time around. I wasn’t disappointed in the least and this series picks up quality wise right where the last one left off!

This first issue is written and drawn Dean Motter.

Right away I sat up. Motter is an excellent comic book creator and is truly underrated. His story is called “The Tell-Tale Black Cask of Usher.” This was an awesome first story for this comic.

Motter shows us Poe himself in the first few pages preparing a drink.

He finishes the drink and addresses the audience. He tells us that he is going to tell us the story of a cask of sherry wine. It is a nice little set up and then we are thrown into one hell of a flashback.

We are sent to a few years back when Poe was in Boston. Poe gets into a fight with Rufus W. Griswold, his colleague and publisher over a book of his poems. Poe goes drinking trying to plot a revenge but can’t seem to conjure one up. An old man shows up and sits next to Poe. He tells Poe that he has a better and higher quality of drink at his house than this establishment.

He then invites Poe to join him home and Poe accepts.

That is when things get crazy and reality is questioned. Motter does a top level job here keeping things going. Poe and the old man go to the man’s house and it is a house of horrors of sorts. It is very spooky and a bit funny. Funny in a very uniquely macabre way.

We get to see that the old man is keeping the corpse of a woman named Lenore. Things start picking up. We then see a fight between Poe and a cat that I found quite amusing. It all leads to a nice twist at the end that brings the whole thing home. It is all very well done and really well composed.

Motter does a great job both writing and illustrating this story. There are even a few amusing essays in the back. Ahoy Comics had proven once again that they are one of best new publishers in comics.