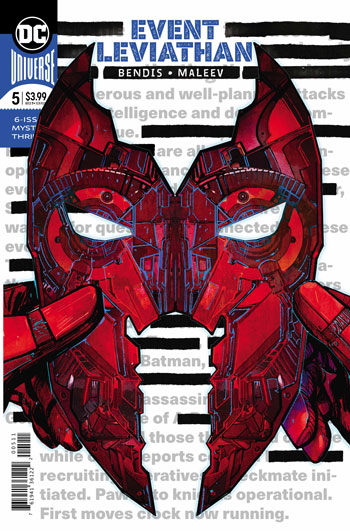 Event Leviathan has been a see-saw affair with great highs and disappointing lows.

Every other issue has been a step down not only from a narrative perspective but an illustrative one as well.

The first issue set up the story quite nicely, with an engaging visual tone.

The second installment took a step back in both areas.

If you’ve picked up on the pattern of good book, bad book, then it is safe to assume the penultimate chapter of DC’s mystery thriller delivers the goods.

Lois Lane had a whole other group of detectives working to solve the mystery of Leviathan’s identity.

The first question that comes to mind is how she assembled such a team without her first group of detectives finding out about it. Well, that question doesn’t get answered. However, her second team, helmed by John Constantine, made more headway than the Batman led crew. Bendis made them more successful in a way that didn’t tread on the investigative prowess of the Dark Knight.

From there, a tension-filled guessing game ensues as the primary suspect is revealed.

Everyone converges on this individual, with most of them believing they’ve caught Leviathan. Other’s thought it was a red herring, and Bendis used the emotion of those scenes to get the absolute most engagement out of the story.

It worked whether you believed the person of interest was guilty or innocent. Alex Maleev’s artwork depicted pure chaos at this moment. People were shouting, giving orders, and point fingers aa a massive power surge ultimately revealed the full scope of Leviathan’s plan and resources.

The why of Leviathan’s plan is nothing we haven’t heard before.

However, Bendis executes the reveal potent enough for it to matter with one key ingredient…Superman. How Big Blue factored into Leviathan’s grand plan comes to light. Respect is involved, which eliminated some of the usual suspects. The color pallette of Maleev’s illustrations augmented this scene with bright whites mixed with blue hues, indicating frightening and perhaps, ceaseless power.

I’d be remiss if I didn’t talk about the rumors online about the spoilers surrounding Leviathan’s identity. I’m not going to ruin it here.

However, the conclusion of this issue certainly lends credence to the rumors checking out. I’m going to withhold judgment until the finished product comes out because it all comes down to execution.

However, if the reveal falls flat, Bendis will be damned with faint praise. There is always the possibility Bendis has been brilliantly and meticulous, setting everyone up for the ultimate swerve by deception. We will have to wait and see. If you needed a reason to get excited about next month’s grand finale, this book does the job!