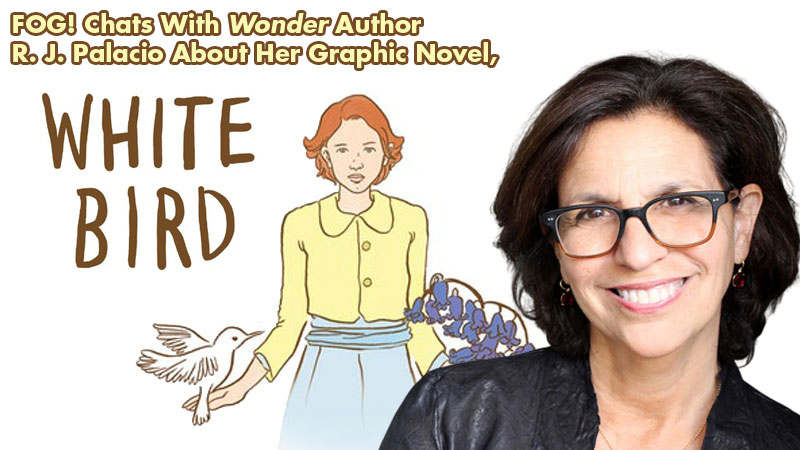 I had little knowledge of author R.J. Palacio’s work other than having seen the memorable cover of her book, Wonder, which seemed to be everywhere.  After seeing the film adaptation of Wonder, I began to understand her appeal.

Be a nice person. Be a good person.

Her latest book, is also her first graphic novel which she not only wrote, but also illustrated. White Bird is revelation; captivating and endearing, this book is important as it delves into the anti-Semitism movement that led to the extermination of 6 million Jews in the holocaust.

And once again, you’re reminded.

Be a nice person. Be a good person.

FOG!: First of all, congratulations on White Bird. I thought it was really fantastic. You studied illustration at Parsons School of Design before becoming a bestselling author with Wonder. What was the genesis of telling the story of White Bird as a graphic novel?

R. J. Palacio: Hi, and THANK YOU! I had a couple of reasons for using a graphic novel format to tell the story of White Bird.

First and foremost, the narrative came to me in a very cinematic way. Sometimes when you’re writing, it’s the words that weigh in first—a sentence or turn of phrase that hits you, around which you build worlds. But with White Bird, it was a bunch of images that came to me first. The idea of a little girl seeing herself in a bird. The bluebell forest. The wolf in her dreams. So I felt from its very inception that it was meant to be told in a visual medium.

Second, I wanted to work on something that would still allow me to engage with the rest of the world. Given the nature of the times we’re in, going into a quiet corner every day to write a novel didn’t seem like an option to me. I felt the need to engage with the community, to keep alert to what was and is going on around me. So working on a graphic novel—in essence, drawing all day long—allowed me to work while still engaging. I could draw on my iPad while watching the news every night. I could work in Photoshop at my computer and listen to podcasts.

Third, and maybe the simplest reason: I missed drawing! I love being a full-time writer, don’t get me wrong, but I do miss dabbling in the visual arts every day, so this was a way for me to do that.

My only exposure to Wonder was the film, which I thought told such a special and unique story. What was the motivation to move beyond Auggie as the protagonist and instead focus on Julian’s grandmother, Grandmère?

I introduced Grandmère to readers in Auggie & Me, which was a companion book to Wonder. And I started getting a lot of emails from teachers telling me that her story was a really good introduction to the Holocaust for their fourth and fifth graders. 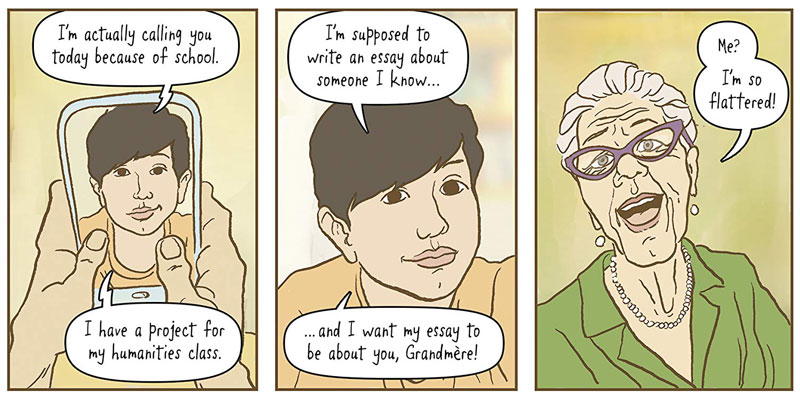 The themes of White Bird are, in a way, a natural extension of the themes in Wonder in that they’re both about kindness. The difference is, of course, that in those days, choosing to be kind could literally cost people their lives.

That’s when kindness takes on heroic proportions. I couldn’t help but think that those themes were very relevant to the times we’re living in right now, when people are faced with the choice every day: to be kind, or not to be kind.

Growing up Jewish, the notion of “never letting (the Holocaust) happen again” was considered to be a given. Now, in the current political climate, there’s a constant concern that it very well could happen again. Was Grandmère’s experience of being a young Jewish girl hidden away by a family in Nazi-occupied France based on anyone you knew, or was it simply inspired by documented events?

As Primo Levi said, “It happened, therefore it can happen again.” The world always needs to stay vigilant for signs of it happening again, as it’s not something that happens all at once. It happens slowly, with the mainstreaming of hate speech, the normalization of discrimination, the dissolution of civility and humanity. I tried to show that in White Bird, how Sara goes from being an ordinary girl in the country of her birth to seeing her rights slowly stripped away.

While her story isn’t based on any particular person, it is set within historical events—the Nazi invasion of France, the splitting of the country into Free and Occupied Zones, and the impact on Jewish citizens as the Vichy government worked with Germany to purge first its immigrant Jews and then its naturalized ones.

I lived in Paris for a year many moons ago, and have always been intrigued by the inherent contradictions in the way France dealt with the Nazis. There were those who collaborated. There were those who didn’t. I think it’s representative of the way countries are dealing with xenophobia and intolerance all around the world right now, including our own. It’s like we’re divided into two zones on every level—the zone of people who are, in essence, collaborating with intolerance, and the zone of people who are fighting it. 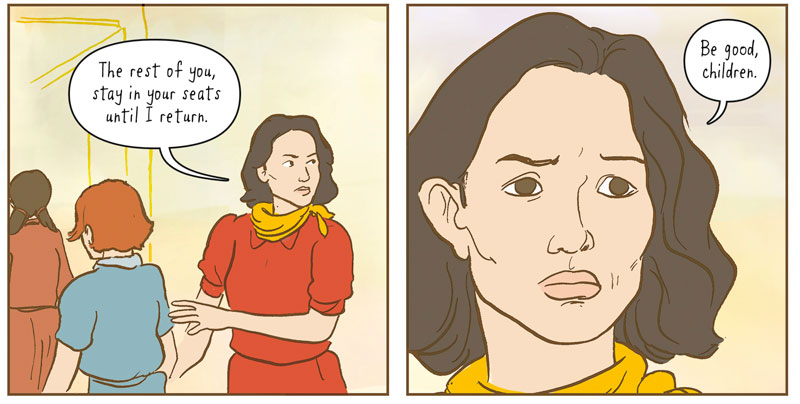 When these times we’re living in become part of the historical record, there will be a great number of people who will be horrified to learn they were rooting for the wrong side all along.

What do you think can be done to prevent the ongoing assault of anti-Semitism, at least in this country?

Education. Education is all. When you read surveys that say two-thirds of American millennials have never heard of Auschwitz, you realize we haven’t done enough to educate young people. I think we should really think about teaching it in schools at an earlier age than we do, because we can’t just leave it to books and movies to do the heavy lifting of teaching this. 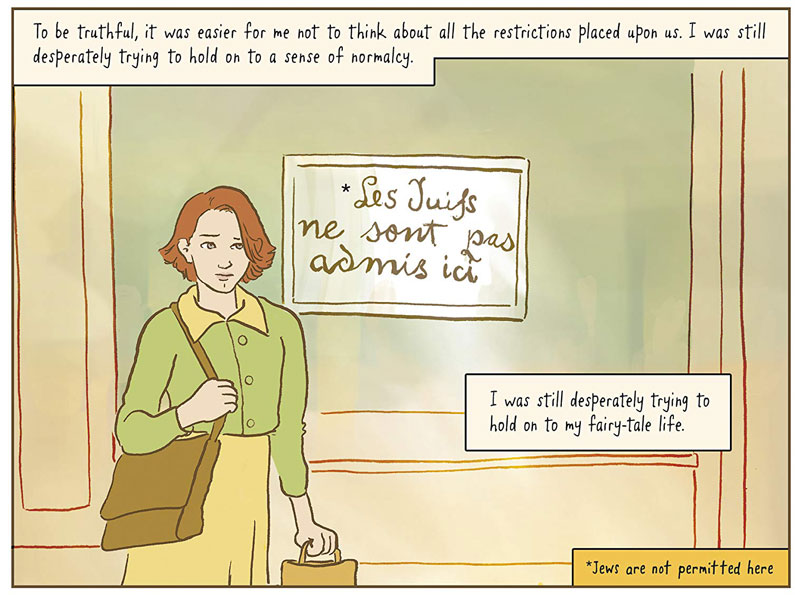 We also can’t have it fall on the shoulders of Jewish people alone to remember the Holocaust. It has to fall to everyone to remember, to look with horror at the atrocities that happened, to honor the loss of six million people, to stop anti-Semitism wherever and whenever they see it. The people on the receiving end of hate and intolerance should never be the only ones fighting it.

Education is the only way to make sure all people have the historical context by which to judge current events so they can recognize patterns, know when they’re being lied to, see themselves as part of a larger world. People also need to be better educated about the Constitution, how democracy works, how state governments work, world history, science. Education lays bare the entirety of the world—and it’s a big and beautiful and wondrous world to know. Ignorance, on the other hand, only makes people fear the world.

Overall, did you enjoy the experience of creating a graphic novel? Is it a medium that you plan to revisit in future work?

I loved it, but it was a huge undertaking! I’d be wary of taking on another graphic novel project myself for a while, at least in terms of illustrating it, because it was a heck of a lot of work. Having said that, if another story comes to me like this one did, kind of like a movie playing in my head, then I might do it again. I’ve learned to never say never.

What is your next project following White Bird?

I honestly don’t know. I have three book ideas that are all kind of battling it out in my head to see which I’ll work on next. I’ve also been so immersed in the world of White Bird for two years that I think I’m going to let a little time pass before making up my mind about what to work on next. 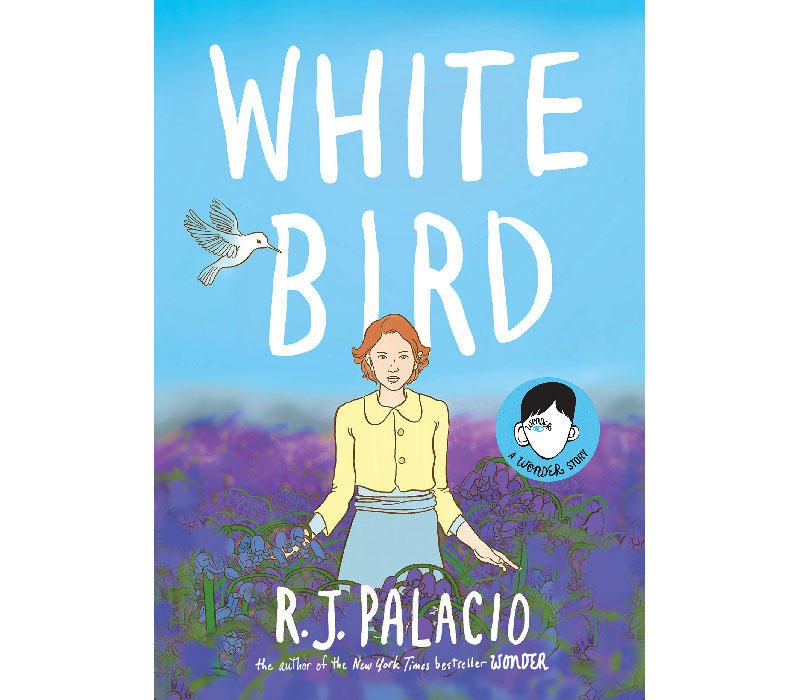 White Bird: A Wonder Story is in bookstores now.