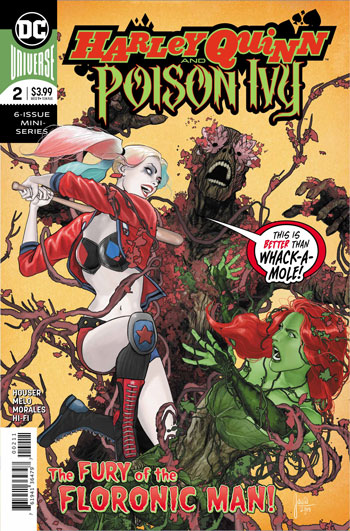 Harley Quinn and Poison Ivy are together in a comic book? Who requested this? It seemed to me from the outset that I would not like this book.

Then I looked at the creative team. Jody Houser is a fine writer and Adriana Melo is a very cool artist. I knew then that this might be a lot of fun if these two were involved.

I read the first issue and I love how Houser made this book into a “road movie” comic. The issue starts with a cool scene. It seems that the place that Ivy and Harley have been staying at has been destroyed! This forces the pair to go on the run!

Yet, Poison Ivy isn’t at a hundred percent. She has just been resurrected and frankly, she is hurting.

This allows Houser to put in some dramatic stakes into the issue. The drama is also nicely drawn by Melo, who does an outstanding job of capturing the characters. Melo also draws one heck of an action scene!

The two are on the run from the Floronic Man. They are running with their backs against the wall. That is when the pair decide to find Jervis Tech, who is also the Mad Hatter. They need his assistance to make a stand. But will he help them? Or are they going to find themselves in an even bigger hole from when they started?

Things really get crazy. The cliffhanger this ends on is really great. And this whole issue is pretty great. From Harley and Ivy’s fight with The Floronic Man, to the really nice dialogue by Houser, this issue is a winner.

Harley Quinn is getting a lot of play in comics these days. The work is getting to be of a higher quality with each new tale. This ranks as one of the better ones.