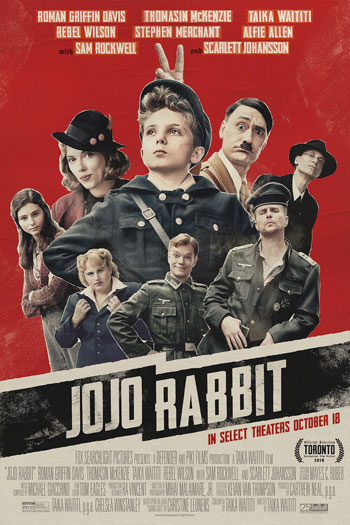 You may have seen the ad and trailers for Jojo Rabbit. You know the one, with Hitler dancing and running like a fool. You might already know a little bit about the plot; a coming of age story of a 10 year old boy in the Hitler Youth learning about death, love, trust, and courage along with his imaginary friend, Adolf Hitler at the end of the Second World War.

What you don’t know about this film is that is is one of the most brilliant satires in a very long time, critiquing both the blind faith and following of a person towards a fanatical idealism. One that even though they know it is flawed they follow anyway.

Because that is what it means to be a good “patriot”.

Writer and director and co-star, Taika Waititi has crafted a sublime and thoughtful study of what it means to belong and what the cost of that belief and belonging can be. Based on the book Caging Skies by Christine Luenens, the story follows the life and pretty eccentric imagination of a Hitler Youth, Johannes “Jojo” Betzler as he prepares himself for the rages of battle near the end of WWII.

The Nazi’s are basically defeated and yet they still train these young boys to die in the name of Der Fuhrer.

Jojo has a secret. His imaginary best friend is none other than Adolf himself, played insanely well by Waititi.

Hitler, of course, is a surrogate for Jojo’s missing father who has disappeared in Italy fighting off the Allied Forces. Everything is going grand for Jojo until a series of misfortunes befall our little goose stepping youth.

Firstly he is blown up by his own misthrown hand grenade, nearly killing him. Secondly, and even worse, in his mind, he discovers his mother is hiding a Jewish teenage girl named Elsa, beautifully portrayed by Thomasin McKenzie, in the crawl space of their home.

From this point on Jojo’s life is thrown asunder and nothing makes any sense anymore. Up is down, left is right, he doesn’t know what to do. And this is a kid who’s imaginary friend is Hitler.

The real charm and love in this film is with Waititi’s ability to get in real close and focus on the people of the story. The intimacy that he is capable of showing between the characters whether it is Jojo and his Mother, played brilliantly by Scarlett Johansson, or Jojo and Elsa as they learn about each other in the quiet of the house is where he truly shines. It is also a great juxtaposition to the brutality of the war around them and the horrors of the Holocaust that is prevalent throughout the movie.

I would put this film up there with Mel Brooks’ Blazing Saddles and 2017’s Death of Stalin by Armando Iannucci as one of the best social satires of all time. It is as smart as it is funny. It is also brutal and heart wrenching. Like all good comedies there must be the drama as well to lift the humor to the next level. Jojo Rabbit balances the humor with the gut punching profoundly well.

I am well aware that this film will not be for everyone, but, I loved it and look forward to seeing it again.