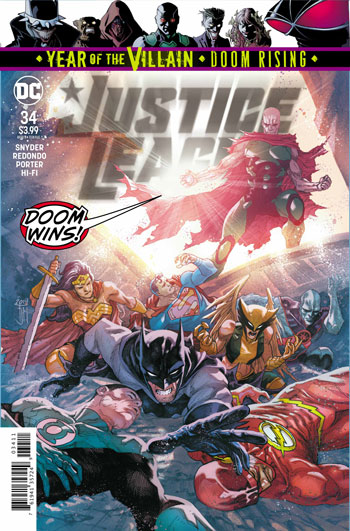 “We can end this! We can seal Perpetua away forever!”

The cover of the latest issue of Justice League shows a victorious Lex Luthor standing over a defeated League shouting, “Doom Wins!”

And uh… yeah, that’s pretty much it. That’s what happens. Not that we didn’t see it coming.

The triumph of Doom has been foreshadowed endlessly in these pages for over a year now.

Really, at this point, if Doom didn’t win, the whole set-up would be a bit disappointing. As it is, the final strokes of the tragedy end up feeling a little anti-climactic. Not that things are over, not by a long shot.

And not for any lack of action. It’s been a bit of a jumble the last five issues, as our core team split up across hypertime to collect fragments of the Totality, while 80’s Starman, Hawkgirl, and the Monitors raced to the edges of the Universe to confront Lex Luthor and Perpetua.

The Dark Mother Perpetua has needed a final piece, the seventh unlocked dark power, to rise ascendant to Her former power and glory. The Justice League is in a race against time to assemble the Totality fragments before enough people accept Luthor’s offer of self-interested villainy, that the scales tip in favor of Perpetua.

All their efforts come crashing onto these pages courtesy of stand-in artists Bruno Redondo and Howard Porter, whether battling the Legion of Doom and the god Poseidon with the Justice Society (and Vandal Savage’s very intriguing Legionnaire’s Club) at the very bottom of the ocean, or launching a full-frontal assault of Justice against the monstrously dominant Braniac 1 Million in a far-flung future.

And because it’s the Justice League, victory is found even in these impossible scenarios. Now all the League has to do is synch up the Starmen from across Hypertime, and finally maybe one of Will Patton’s plans will work.

I admit I find the idea of using the Starman legacy to tie this saga across time and provide our heroes with a path to victory, to be very appealing. It’s a nifty piece of a puzzle that gives the shape of our story an elegance otherwise belied by the level of complication and amount of time that has gone into telling it.

Once again, it demonstrates that author Scott Snyder’s greatest strength lies in his ideas.

Indeed, the whole story of Perpetua and the rise of her Doom is a good one. I just wish his idea of simplicity didn’t amount to dialogue that often sounds like it was written for a 10 year-old.

And speaking of thinly veiled messages pointed at the sorry state of our society nowadays, what does it say that he thrusts Hawkgirl into the starring role of the Justice League’s defeat?

Driven by rage at what Lex Luthor has done to her (sort-of-beloved) J’onn J’onzz, we are apparently to believe that the member of the League who has the most compendious knowledge of military strategy (as in lifetimes of it), chucks it all to satisfy her own self-interested need for revenge.

Lex Luthor calls it faithlessness. Not sure why this seventh dark force should be a cornerstone energy of Creation, but perhaps it does help explain Kendra’s behavior. Otherwise we’re left with the fact that all of the League’s efforts, and sacrifices, and the whole darn sanctity and protection of the Multiverse entire, is betrayed only by the ill-considered short-sightedness of an angry woman.

It’s a damning portrayal, and not only is it hard to believe, the effect is harsh. As are the consequences.

But then, hey, Snyder’s also made the biggest, baddest DC villain of them all to be some dark, twisted and vengeful version of the Cosmic Mother. So maybe he’s working some things out.

Get ready. Lex Luthor stands triumphant. With a world behind him, and a Multiverse to be refashioned.

And a Justice League to claim, and makeover in his own image…