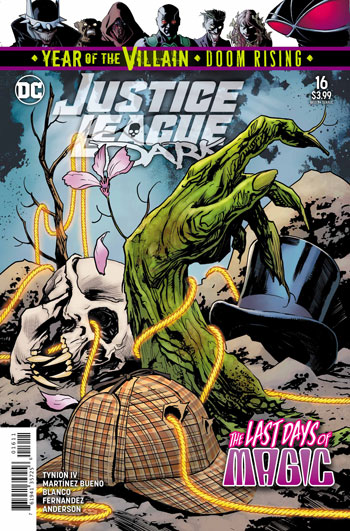 At the end of last month’s issue ends with the warning: “Things Get Worse!”

And they do, things do get worse.

Swamp Thing is a puddle of rotted vegetable goo, the Green firmly under the control of a power-crazed Floronic Man. And the ruling functionary at the Gates of the Dead has struck and agreement with Klarion the Witch Boy and undead Solomon Grundy.

And now, wielding the last of Hecate’s power, her dominion over Life and Death secured, and the means of controlling the Sphere of the Gods in her hands, Circe stands poised to become the most powerful embodiment of Magic ever known.

None of this should come as any surprise, really, what with the great green glowing sigil of Doom showing up in every DC comic on the market. The culmination of Lex Luthor’s plan to raise Perpetua – and empower every villain worth their salt – is about as bad as it’s ever been for DC’s heroes.

And that’s very bad news for the worlds of Magic.

Author James Tynion, of course, has known exactly how bad everything would become – he’s been helping Justice League author Scott Snyder build to this moment for over a year now.

There’s been plenty to keep us entertained along the way – between the Otherkind, Hecate, Nabu and the Lords of Order, it’s been one crisis after another. And all the while, our team has (somehow) failed to appreciate that whatever else they’ve all had to contend with, they’ve also been in a race against time, and the cosmic machinations of Lex Luthor.

That race ends this month, as the universe reaches its tipping point to Doom and tips right over.

And while there’s not too much that actually happens in this issue other than the confirmation of how bad, exactly, things are, we do get a further explanation of Circe’s grand master plan, and just how insane and dangerous it is.

That and the total defeat and subjugation of Wonder Woman.

But then, what exactly did Diana expect?

Using the dark moon-centric power of Eclipso’s diamond to journey to the realm of the collective subconscious, a realm Circe now completely controls with Hecate’s magic, wasn’t the smartest move our Amazonian princess of power has ever made.

It does however, give us the delicious scene of Circe gloating over her old enemy. And she has reason to it seems. As powerful as Circe has become, she wants more. More power, more control. More dominion even, then the great goddesss of Magic, Hecate herself, has wielded since her earliest manifestation.

To do that, Circe needs not only to put her thumb on the Sphere of the Gods (which makes me wonder how that will match up against the power that Cheetah’s been wielding recently over in Justice League), she also needs to find a way to absorb the two mirror aspects of Hecate’s power, separated from her at the dawn of the Universe in order to maintain balance.

What are those two powers?

Well, one is the Otherkind, and we can rest assured that Circe’s machinations have something in store for the horrifying magical creatures of the Dark Multiverse. Eventually.

But the other, as it turns out, is the demon Eclipso himself. In yet another mirror reflection of Magic’s darkest aspects, we learn that Eclipso’s power was separated from Hecate at the very beginning of things, to stand in balance to her brightness (And look how well that worked out for Her. But OK.)

Circe seems to be the only one who knows of the connection between Eclipso and Hecate’s power, the power she now owns, a power she wants to claim wholly for herself in her bid to control all of Magic.

And that can’t be good.

Here I thought Wonder Woman being possessed by Eclipso was the worst thing that could happen. When in fact, Diana has other possessions to worry about.

Next Issue: Next issue? I’m gonna go with… things get even worse.