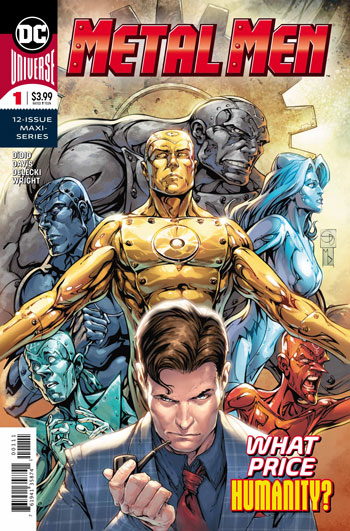 The Metal Men are back for a 12 issue series! I had no idea that this was even coming out and lo and behold, here it is. I have never been a huge Metal Men fan, but DC has been doing some interesting things with some of their older properties lately so I figured that I would give this a shot. It is not bad overall and does have some truly cool moments.

The opening of the book has Dr. Magnus complaining about his life with the Metal Men. He then talks about how the Metal Men came to be, thus catching readers up. The flashback shows their origins. It also shows Dr. Magnus regretting creating them.

Meanwhile, a group of scientists find a strange metal underneath the Earth.

The metal seems pretty dangerous. You know it isn’t long before the Metal Men have to get involved. This little bit introduces some decent stakes into the book.

The metal that is discovered seems to come from the Dark Multiverse! The Metal Men are going to investigate what is happening it seems. That is, after Dr. Will Magnus stops whining. It got to be a little much to be honest.

By the end of the issue, Magnus is ready and inspired again! There is a new metal out there and he has a team to reform! It takes a while to get there, but the issue ends on a strong note. You just have a bit to trudge through to get there.

Shane Davis is perhaps the last artist that I would ever expect to see on this title. But he does a great job capturing the team. There is one big problem with this book however.

There is absolutely no action in the book. Literally, there is not a single action scene. I wish that it had at least one. Instead, it was a lot of talking. And a whole lot of waiting for something to happen.