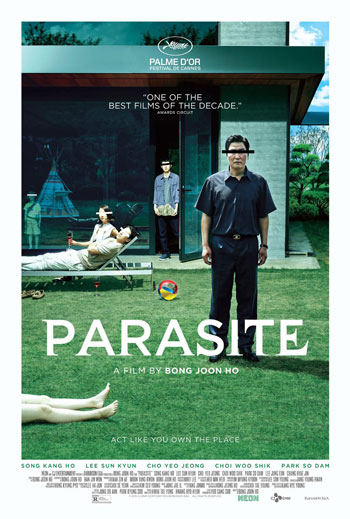 The haves vs. the have-nots fought to the death in Bong Joon-ho’s adaptation of graphic novel Snowpiercer, but in his brilliant new film, Parasite, his portrayal of class war is far more subtle, if just as devastating.

All that changes when Ki-woo’s friend Min-hyuk visits. He brings a large rock that is supposed to bring wealth and also a promising opportunity: He’s going abroad, so he can’t continue to tutor the wealthy (and very pretty) Park Da-hye. He suggests that Ki-woo take over, since he can’t trust his “slavering” fellow college students. All it takes is Min’s reference, a doctored college certificate, and Ki-woo’s own bravado to secure the coveted position.

As Min advised Ki-woo, Mrs. Park is rather “simple,” a gullible woman whose main activities are shopping, fretting over her children, and carrying around one of her three adorable lap dogs,

Now that she’s accepted Ki-woo (whom she dubs “Kevin” since American nicknames are more prestigious), he sees an opening for the rest of his family as well.

Soon the rest of the Kims have insinuated their way into the Park household. The tension is not simply whether they can continue to carry out their profitable deception, but if the casually classist comments from the Parks will bring this delicate relationship to a breaking point. Bong masterfully stretches this tension while building sympathy for both the desperate Kims and the blissfully unaware Parks.

The magnificent post-modern Park home, with its clean, hard edges of glass and concrete, is both a fairy tale castle to be aspired to and a fortress to be defended. As with Snowpiercer — in which an ever-circling train containing the last vestiges of humanity continually pits the wealthy against the powerless poor – Bong conveys the same sense of an inevitable cycle of oppression and violence within these walls.

The metaphor didn’t work quite so well in Snowpiercer, which was based on the French graphic novel. But Bong’s own creation (co-written with Han Jin-won) yields a far more potent film. It’s one of the best films of the year and a master class on classism.