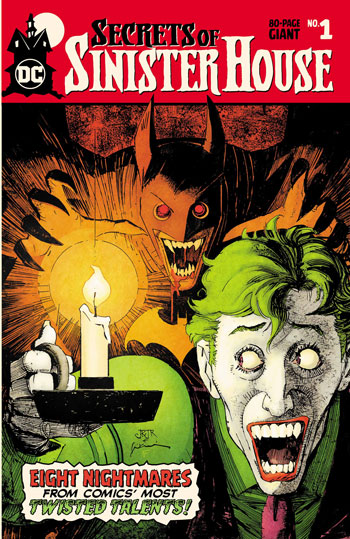 Just in time for the Halloween season, DC has brought back this title. I love it when DC does things like this. It gives creators a chance to work in a sandbox that maybe they wouldn’t otherwise. There are some really excellent self contained stories within these pages and I pretty much loved most of them.

The first story in this anthology is co-written by Rafael Scavone and co-written and illustrated by Rafael Albuquerque. It is a truly beautiful story. It takes place in the Red Rain Batman universe.

And that is when the Court of Owls makes a surprising appearance. There is a rooftop fight that is completely brutal and amazing. I read this twice. It was quite excellent.

This is a great first story and makes the issue worth buying for this story alone. The art is gorgeous and the story is fantastic. I hope that we get more from Albuquerque and Scavone in this Elseworlds Universe after this story. It almost demands it. It is really that good.

From there, we go over to a very bleak story. This one was kind of a dud for me. Dan Watters and Sumit Kumar have Ryan Choi as the Atom. This one is influenced by Lovecraft. There is some nice artwork by Kumar but it is rather uninteresting and a tad boring. Moving on.

The next story is by Paul Dini and Cian Tormey. I wasn’t a huge fan of the art in this. But the story is pretty cool. This is a story of Harley Quinn and Zatanna on the road. They stop at a “Clown Motel” which is haunted. Dini keeps the story light and a bit creepy. There are the typical haunted house scares and it is pretty fun overall.

I really disliked the Martian Manhunter story that was next. I love the art of Phil Hester here though. He is the perfect artist for this character. The story is as bland as can be. It has J’onn tracking down an alien killer. The story is dark and weird and yet somehow boring. It just didn’t fit for the character for me. Maybe it is just me but it just didn’t work.

Robbie Thompson and Tom Raney then create a tale featuring Detective Chimp on his own. While I am not a huge fan of artist Tom Raney, this story actually worked quite well. It seems like the Justice League Dark team has been captured and it is up to Chimp to save them. Or so it seems. There is a nice twist at the end of the story that makes the whole thing work quite well overall.

The next story is by John Layman and Jorge Fornes. It features a young family moving into a mansion. The mansion(of course) is creepy as hell. It is a pretty familiar tale. But there are enough twists and turns in this that make it fantastic and there is a surprise appearance from one of my favorite characters in comics. The art by Fornes is amazing. He is one of the best artists in the field and proves that here yet again. This is tied with the first story for the best of the issue.

Che Grayson and Miguel Mendonca have s nice little story about Jessica Cruz and it shows her having a crises that has to do with fear. It shows her dealing with a fear in her head. She can’t tell what is real and what isn’t. It is a nice little tale that does feature some cool art. It is short but highly effective.

Bryan Hill and Alessandro Vitti finish up the issue with a ghost story featuring John Constantine. Constantine helps a ghost find her killer. While it seems standard, this is actually pretty great. It feels like the old school Hellblazer that we haven’t seen in quite some time and not the neutered version from the past few years. I commend the creative team on this for making a nice story. This style for Constantine has been sorely missed.

Overall, this is a fine anthology for the holiday season. I enjoyed it very much. There are two stories that aren’t up to snuff but the other ones are really terrific. Well done DC on this issue!