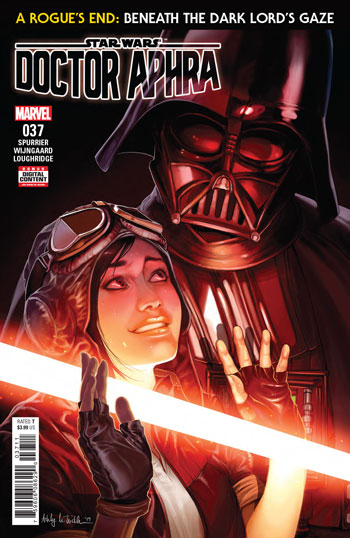 Rogue archaeologist Doctor Aphra has a most complicated relationship with Darth Vader.

She did dirt for him; she blackmailed him, and almost got him killed. If that’s not enough, she even snitched on him to The Emperor. The former Anakin Skywalker responded by killing Aphra via her worst fear after he allegedly promised a quick and painless death.

Only, Doctor Aphra survived, and her ongoing series began.

Wild adventures, murder droids, the reveal of her sexuality and more produced what many call the best Star Wars comic book of the new cannon.

However, there has been a dark cloud hanging over everything that has transpired in this series.

Well, the cats out of the bag.

Aphra has found herself in the The Empire’s employ and finally has her long waited meeting with Darth Vader. It’s long-awaited for readers, but not Aphra. Si Suurrier did a fantastic job of showing Aphra’s blatant sarcasm only for it to turn to utter fear when Vader appears. Normally, it would be nice to see someone with a boundless ego get knocked down a peg or two. However, Suurrier did it in a way where I felt sorry for her, despite setting up an innocent bystander right before.

Casper Wijingaard’s artwork is in full swing. Seeing Aphra slumped in fear of the dark lord made me slouch a little bit while reading this issue. Aphra gets off “easy” during her first timmed encounter with Vader and the outcome beautifully illustrated not just the result, but the trajectory and impact of the moment.

The story is getting close to the end of the three year gap between A New Hope and Empire Strikes Back. Some familiar characters and elements appear, which makes the known destination an exciting proposition. It’s all augmented by the question of how Aphra will fit into the eventual discovery of Hoth.

It’s hard not to judge this issue solely on the Vader/Aphra confrontation. However, it something that’s been built up since day one. Not only was it worth the wait but the ending served as the ultimate fustercluck for the beloved doctor.